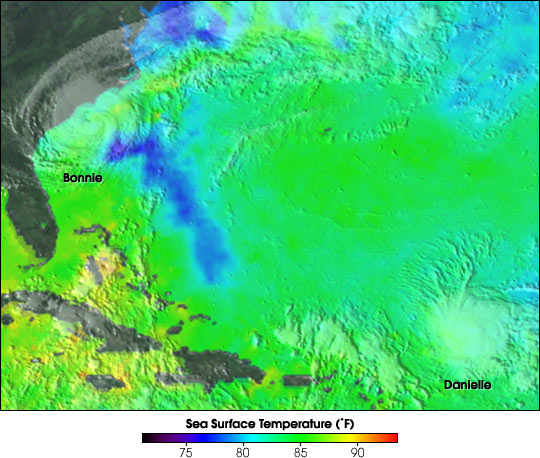 For years scientists have known there is a strong correlation between sea surface temperature and the intensity of hurricanes. But one of the major stumbling blocks for forecasters has been the precise measurement of those temperatures when a storm begins to form. In this scene, clouds have been made translucent to allow an unobstructed view of the surface. Notice Hurricane Bonnie approaching the Carolina Coast (upper left) and Hurricane Danielle following roughly in its path (lower right). The ocean surface has been falsely colored to show a map of water temperature--dark blues are around 75°F, light blues are about 80°F, greens are about 85°F, and yellows are roughly 90°F.

A hurricane gathers energy from warm waters found at tropical latitudes. In this image we see Hurricane Bonnie cross the Atlantic, leaving a cooler trail of water in its wake. As Hurricane Danielle followed in Bonnie's path, the wind speed of the second storm dropped markedly, as available energy to fuel the storm dropped off. But when Danielle left Bonnie's wake, wind speeds increased due to temperature increases in surface water around the storm.

As a hurricane churns up the ocean, it's central vortex draws surface heat and water into the storm. That suction at the surface causes an upwelling of deep water. At depth, tropical ocean waters are significantly colder than water found near the surface. As they're pulled up to meet the storm, those colder waters essentially leave a footprint in the storm's wake which might last as long as two weeks. Forecasters can quantify the difference in surface temperatures between this footprint and the surrounding temperatures and use that information to better predict storm intensity. If another storm intersects with this cold water trail, it is likely to lose significant strength due to the fact that the colder water does not contain as much potential energy as warm water.

This image of sea surface temperature was acquired by the AMSR-E instrument aboard NASA’s Aqua satellite on September 6, 2004.

This image of sea surface temperature was acquired by the AMSR-E instrument aboard NASA’s Aqua satellite on September 6, 2004.