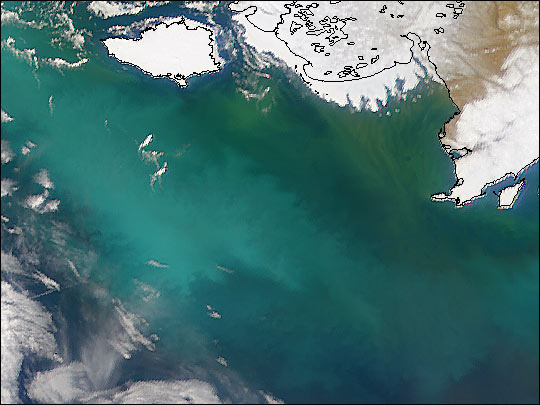 For the fourth year in a row it appears as if there is a bloom of coccolithophores—marine single-celled plants with calcite scales—in the Bering Sea off the coast of Alaska. Similar blooms were rare before 1997, but they have appeared every year since then. Scientists believe the coccolithophore blooms are the result of changing wind patterns in the region. Weaker than normal winds fail to mix the water of the Bering Sea, resulting in the growth of coccolithophores instead of other types of phytoplankton. Seabird populations have also been changing as a result of this climate change.

The Sea-Viewing Wide Field-of-View Sensor (SeaWiFS), flying aboard the OrbView-2 satellite, saw the coccolith-brightened waters of the Bering Sea in 1997, 1998, and 1999. The waters have looked fairly bright again this winter and spring, as seen in this SeaWiFS image acquired April 29, 2000. But scientists are unsure whether this year's phenomenon is caused by living coccolithophorids, re-suspended coccoliths, or something else.

Like all phytoplankton, coccolithophores contain chlorophyll and have the tendency to multiply rapidly near the surface. Yet, in large numbers, coccolithophores periodically shed their tiny scales, called "coccoliths," by the bucketful into the surrounding waters. The calcium-rich coccoliths turn the normally dark water a bright, milky aquamarine, making coccolithophore blooms easy to spot in satellite imagery. The edge of the whitish cloud in the water seen in this image is roughly 50 kilometers off the West Coast of Alaska.