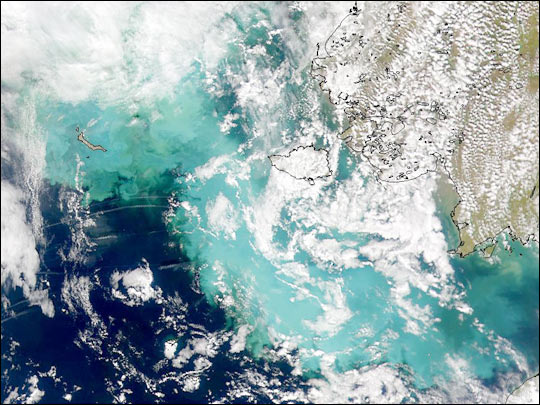 Over the past several years, dense clouds of phytoplankton (microscopic plants that live in water) have appeared in the Bering Sea each summer. One class of phytoplankton are particularly easy to spot from overhead. Called coccolithophores, these phytoplankton grow calcium-rich shells. These shells are bright white and turn the water where they grow a milky blue.

The Sea-viewing Wide Field-of-view Sensor (SeaWiFS) captured this image of coccolithophores off the coast of Alaska on September 13 and 14, 2000. (The Bering Sea straddles the International Dateline, so the left side of the image is the 14th while the right is the 13th.) The bloom covers approximately 400,000 square kilometers (154,000 square miles). Swirls of water with varying shades show ocean currents and eddies. In general, the brighter the water, the higher the concentration of coccolithophores. SeaWiFS has been taking pictures of this area since 1997. Follow these links to see more images:

Swirls of Color in the Bering Sea