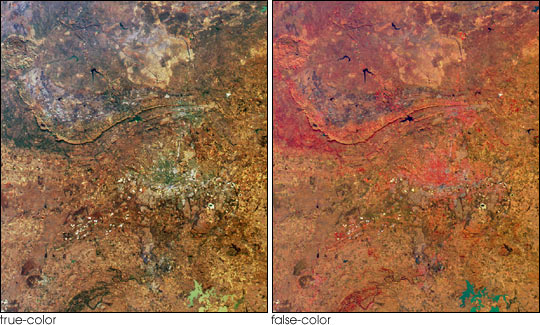 Although the extraction of mineral wealth has been the major influence in the history of Johannesburg and the surrounding Witwatersrand regions (with about 45% of all gold ever mined coming from there), the discovery of now-famous hominid fossils at the Sterkfontein Caves and the convening of the world’s largest-ever conference on environment and development are setting a new stage for the future. The United Nations began the second Development and Environment Conference in Johannesburg on August 26, 2002. This meeting addresses the implementation of international goals to fight poverty and protect the global environment that were established at the first such conference held in Rio de Janeiro in 1992. The Johannesburg summit involves about 40,000 participants and roughly 100 world leaders. One of several official opening ceremonies for the conference was held at the Sterkfontein Caves to recognize the outstanding universal value of the paleo-anthropological fossils found there.

These views from the Multi-angle Imaging SpectroRadiometer (MISR) highlight a number of the land use, vegetation, and geological features found within Gauteng Province (including the urban center of Johannesburg and the capital city Pretoria) and parts of the North West and Free State Provinces. The image on the right displays vegetation in red hues and is a false-color view utilizing data from MISR’s near-infrared, red, and blue bands. Both the natural-color view (left) and the false-color version were acquired by MISR’s nadir camera on June 16, 2002. The urban areas appear as gray-colored pixels in the natural-color view and exhibit colors corresponding with the relative abundance of vegetation found in the urban parts of this arid region.

The mountains trending east-west near the center of the images extend from Pretoria in the east to Rustenberg in the west. These ranges, the Magaliesberg and Witwatersberg, separate the low-lying, hotter bushveld to the north from the cooler highveld to the south. The large round feature near the northwest corner indicates an ancient volcanic crater in the Pilanesberg National Park. Many bright, buff-colored rectangular patches around Johannesburg are associated with mining activities, and at least two of these areas (situated 40 kilometers southeast of the city) hold large amounts of water. The Sterkfontein Caves (now included within the recently created “Cradle of Humankind” World Heritage Site) are located about 35 kilometers northwest of Johannesburg. In the southern portion of the images, a section of the Vredefort Hills are apparent to the west, and to the east the Vaal River, a large water body contained by the Vaal Dam delineate the border between the Gauteng and Free State provinces.

The Multi-angle Imaging SpectroRadiometer observes the daylit Earth continuously from pole to pole and views almost the entire globe every 9 days. This image covers an area of about 190 kilometers by 221 kilometers.