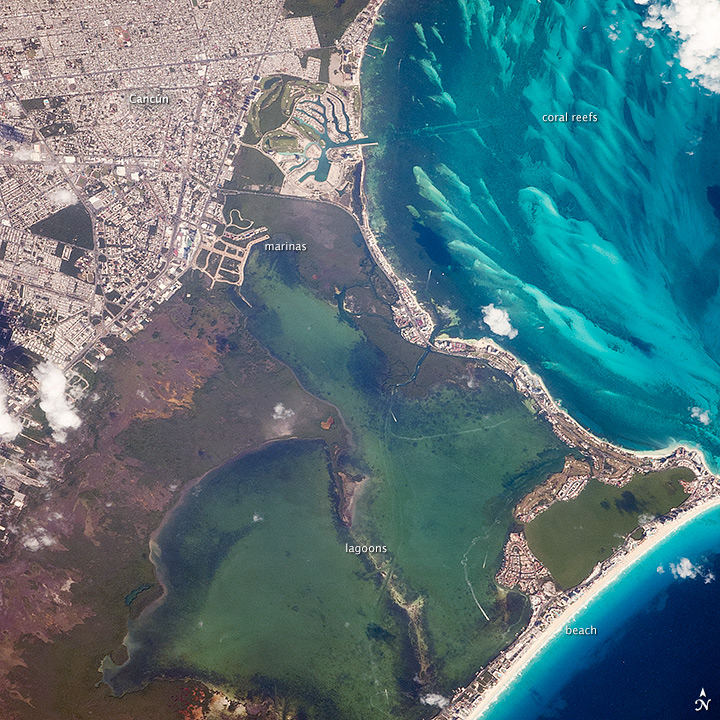 A long lens was used by astronauts aboard the International Space Station to take this photograph highlighting many natural and built features around Cancún. The street pattern of this Mexican tourist mecca contrasts with the waterways of the marinas that open into the bay and the lagoons. And the brilliant blue water over coral reefs contrasts with the dark waters of inland lagoons. The reefs are part of the second largest reef system on Earth, and they draw tourists from all over the world.

The wide, well-developed white-sand beach on the Gulf Coast is the result of vigorous wave energy. But wave energy is reduced along the protected shoreline closer to the city (image center), and the beaches are thin or non-existent. Fair-weather cumulus clouds are scattered across the top left of the image.

To shoot crisp images with long lenses, astronaut photographers must learn to brace themselves against the ISS bulkhead to prevent any slight shaking that would blur or smear the picture. Counterintuitively, they need to move the camera carefully keeping the target at the same point in the viewfinder because the landscape moves across the viewfinder quickly. This is called “tracking the target” and requires good coordination by the photographer to prevent blurring. Shorter lenses do not require this skill because the image passes more slowly across the viewfinder.

Astronaut photograph ISS040-E-112662 was acquired on August 30, 2014, with a Nikon 2Xs digital camera using an 800 millimeter lens, and is provided by the ISS Crew Earth Observations Facility and the Earth Science and Remote Sensing Unit, Johnson Space Center. The image was taken by the Expedition 40 crew. It has been cropped and enhanced to improve contrast, and lens artifacts have been removed. The International Space Station Program supports the laboratory as part of the ISS National Lab to help astronauts take pictures of Earth that will be of the greatest value to scientists and the public, and to make those images freely available on the Internet. Additional images taken by astronauts and cosmonauts can be viewed at the NASA/JSC Gateway to Astronaut Photography of Earth. Caption by M. Justin Wilkinson, Texas State University at NASA-JSC.

A long lens was used by astronauts aboard the space station to take this photograph of the many natural and built features around this Mexican tourist mecca.