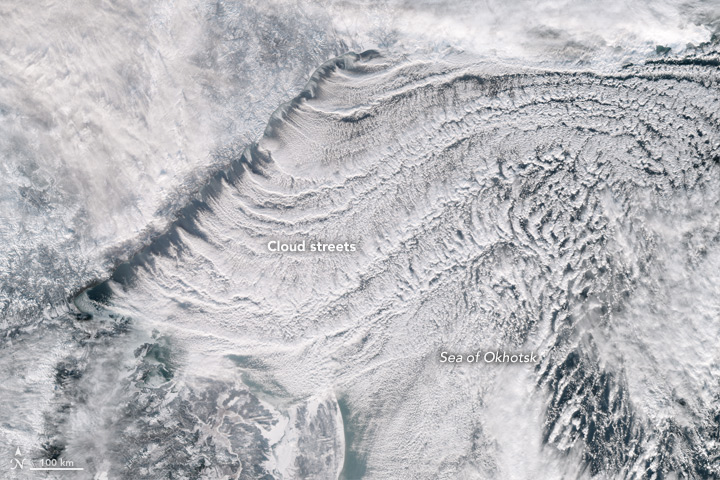 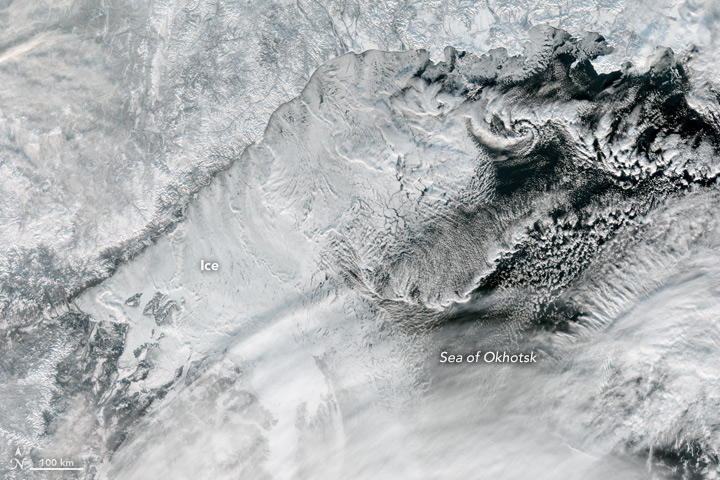 For most of each winter, the Sea of Okhotsk is covered in ice. This pair of images shows the sea before and after this year’s transformation.

The Sea of Okhotsk is what oceanographers call a marginal sea: a region of a larger ocean basin that is partly enclosed by islands and peninsulas hugging a continental coast. With the Kamchatka Peninsula, the Kuril Islands, and Sakhalin Island partly sheltering the sea from the Pacific Ocean, and with prevailing, frigid northwesterly winds blowing out from Siberia, the sea is a winter ice factory and a year-round cloud factory.

The first natural-color image was acquired by the Visible Infrared Imaging Radiometer Suite (VIIRS) instrument on the Suomi NPP satellite on November 25, 2017. Snow and clouds cover much of the coastal land, and some sea ice appears toward the lower left. The dominant feature of the image is the pattern of cloud streets—parallel lines and arcs of cumulus clouds over the water.

Cloud streets typically form when cold air blows over warmer waters, picking up heat and moisture. As this air becomes warmer and wetter, it starts to rise in columns until its hit a warmer air layer, which makes the rising thermals roll over and loop back on themselves, creating parallel cylinders of rotating air. On the upper edge of these cylinders, clouds form. On the falling side (descending air), skies stay clear. Thanks to strong, cool land breezes and warmer Pacific waters, the Sea of Okhotsk is covered by clouds (with or without streets) for much of the year.

The image also shows some sea ice forming close to the northwest coast; click on the large image download and zoom in. You will also note that the cloud streets start to form at some distance from the shore. This is because the northwesterly winds need some time and distance to pick up enough heat and moisture to start rising thermals. Well offshore, another wind pattern puts a kink in the cloud streets.

In the second image, acquired by VIIRS on December 25, 2017, most of the northern and western reaches of the Sea of Okhotsk are covered with sea ice. The region is the lowest latitude (45 degrees at the southern end) where sea ice regularly forms. Ice cover varies from 50 to 90 percent each winter depending on the weather. Ice often persists for nearly six months, typically from October to March. Aside from the cold winds from the Russian interior, the prodigious flow of fresh water from the Amur River freshens the sea, making the surface less saline and more likely to freeze than other seas and bays.