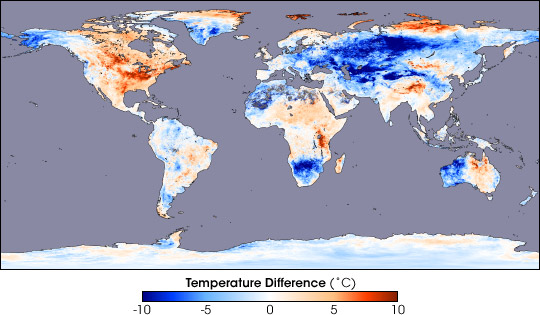 While those in the eastern half of the continental United States have been experiencing an unusually mild January this year, others around the globe have not been so fortunate. The North American Great Lakes remain ice-free so far this season, but many areas in Europe and Asia are experiencing one of the most frigid winters in several decades. According to reports from the BBC Website, temperatures in Moscow have hit lows not seen since the late 1920s, and the energy infrastructure, which supplies many neighboring countries, struggled to keep up with demand.

The dramatic difference in January temperatures between the northern halves of the Eastern and Western Hemispheres is revealed in this image of land surface temperature data collected by the Moderate Resolution Imaging Spectroradiometer (MODIS) sensor on NASA’s Terra satellite. The image compares the temperatures between January 1-24, 2006, to the average temperatures for that period from 2001-2005. Regions where temperatures were up to 10 degrees Celsius colder (18 degrees Fahrenheit) this year are dark blue, while places where it was 10 degrees Celsius warmer are shown in dark red. Places where temperatures matched the 5-year average are white. Most of the United States and Canada east of the Rocky Mountains are much warmer than the 5-year average, while Eastern Europe, much of Russia, and central Asia are decidedly chillier.

According to climatologist David Rind of NASA’s Goddard Institute for Space Studies, the unusual January 2006 temperatures are linked to the position of the polar jet stream. The polar jet stream is a fast-flowing river of air that whips around the planet at high altitudes at speeds equal to or greater than 50 knots (92.6 kilometers/hour, 57.5 miles/hour). This current of air generally divides cold, polar air, and warmer, mid-latitude air. The jet stream doesn't always stay at the same latitude; it has peaks and valleys in it like a wave. In January 2006, an unusually persistent “peak” in the latitude of the jet stream across North America often kept polar air from creeping southward into Canada and the United States. In Eastern Europe and Russia meanwhile, a persistent “valley” kept the jet stream flowing at more southerly latitudes, allowing cold air to dip deeply in the region.

While there are cyclic climate phenomena, such as the North Atlantic Oscillation, that are associated with more- or less-severe-than-normal winters in parts of the northern hemisphere, there doesn’t necessarily have to be anything “behind” an unusually warm or cold month or season. The weather is a chaotic system with a lot of variability, and it can exhibit seemingly “out-of-the ordinary” behavior, especially over the short-term, that is not linked to any specific climate phenomenon.

NASA image by Reto Stöckli, based on data provided by the MODIS Land Surface Temperature Group