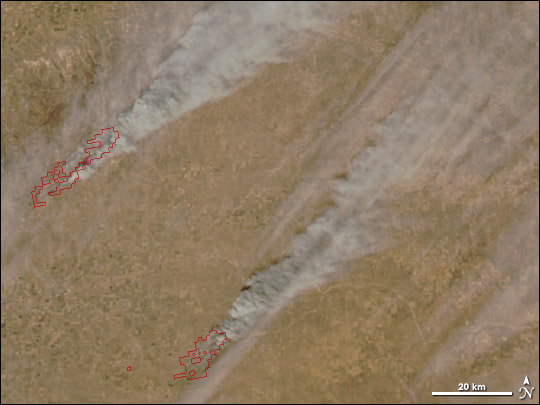 Strong winds and dry weather propelled fast-moving grass fires in northern Texas on March 12, 2006. This image, taken by the Moderate Resolution Imaging Spectroradiometer (MODIS) on NASA’s Aqua satellite, outlines active fires in red. Thick plumes of grey and white smoke stream away from the fires. These fires are burning in the northern panhandle of Texas, northeast of the city of Amarillo. The northern part of the fire complex is burning near Borger, Texas, about 10 kilometers east of Lake Meredith (shown in the large image). The southern fire is near Interstate 40, near the town of Jericho.

At least seven people have died in fires across the Southern Plains, four in a traffic accident on Interstate 40 when thick smoke suddenly shifted across the road, the Associated Press reported. The National Interagency Fire Center reported 168 fires in the Southern United States early on March 13, and one of the largest was the East Amarillo Complex fire, shown here. The fire had burned 100,000 acres of grassland, and forced the evacuation of multiple towns.

The large image provided above has a resolution of 250 meters per pixel. The MODIS Rapid Response Team provides the image in additional resolutions.

Numerous fires were burning across the Southern Plains on March 26, 2006.