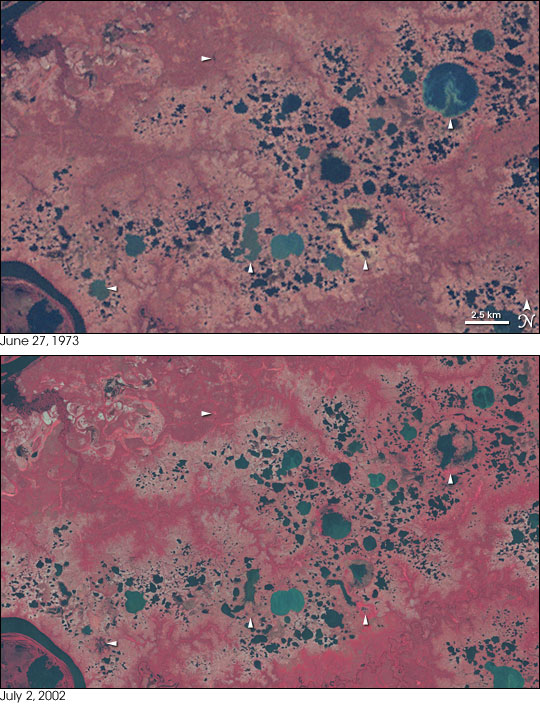 In the far North, short summers thaw only the top layer of the frozen ground. Beneath this shallow layer, the soil is permanently frozen—permafrost. The permafrost is like the cement bottom of a swimming pool. Water saturates the soil above the permafrost and collects on the surface of the tundra in tens of thousands of lakes. However, temperatures are climbing in the Arctic, and the bottom of the pool appears to be cracking. Using satellite imagery, scientists have documented that in the past two decades, a significant number of lakes have shrunk or disappeared altogether as the permafrost thaws and lake water drains deeper into the ground.

This image pair shows lakes dotting the tundra in northern Siberia to the east of the Taz River (bottom left). The tundra vegetation is colored a faded red, while lakes appear blue or blue-green. White arrows point to lakes that have disappeared or shrunk considerably between 1973 (top) and 2002 (bottom). After studying satellite imagery of about 10,000 large lakes in a 500,000-square-kilometer area in northern Siberia, the scientists documented a decline of 11 percent in the number of lakes, with at least 125 disappearing completely.

As the Arctic warms, loss of snow and ice make the region less efficient at reflecting incoming sunlight, which accelerates warming. As a result, the Arctic is warming faster than Earth’s middle or equatorial latitudes.

These images use near-infrared, red, and green wavelength data from the Landsat MSS sensor (1973) and the Landsat ETM+ sensor (2002).