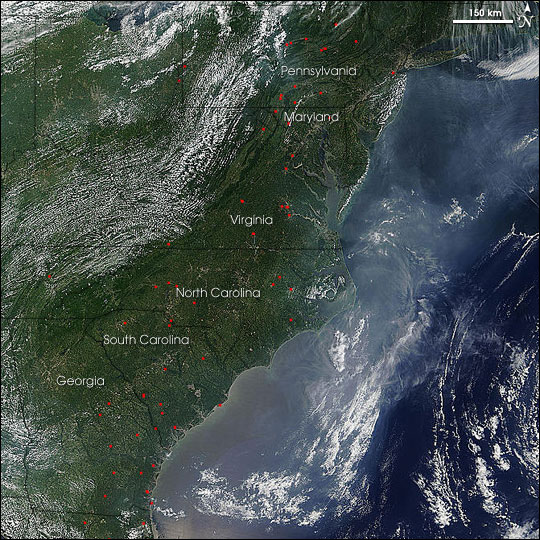 Groan. That’s what millions of Americans in the eastern United States were doing each morning in the last week of July as they woke up to yet another day of hot, humid, stagnant air. Throughout the week, the Environmental Protection Agency has been issuing air quality warnings for the Midwest, the Southeast, and the Mid-Atlantic as pollution levels have reached the “Unheatlhy for Sensitive Groups” category in many places. In these conditions, those with respiratory problems, such as asthma and allergies, are advised to stay indoors, while even healthy children and adults are advised against prolonged exercise or outdoor activity.

This image of the Eastern United States was captured on July 26, 2005, by the Moderate Resolution Imaging Spectroradiometer (MODIS) on NASA’s Terra satellite. Hazy air from along the eastern seaboard from Pennsylvania to Georgia was lingering over coastal regions and spreading out over the Atlantic Ocean. Numerous fires were detected by MODIS and have been marked with red dots.

Although many meteorological and human factors influence air quality, among the major culprits is high atmospheric pressure. High pressure usually creates a stable—stagnant—region of air in which the emissions from our vehicles, power plants, and fires keep piling up. Not only does the hot humid air trap emissions and cause them to linger over the region, but the extremely uncomfortable conditions also cause electricity needs to spike: the power grid must generate more electricity for running refrigeration and air conditioning devices. The additional demand creates additional air pollution, making the air quality problems worse. Fortunately, forecasters were predicting that the high pressure would weaken later in the week, allowing cooler, cleaner air from Canada to sweep through.