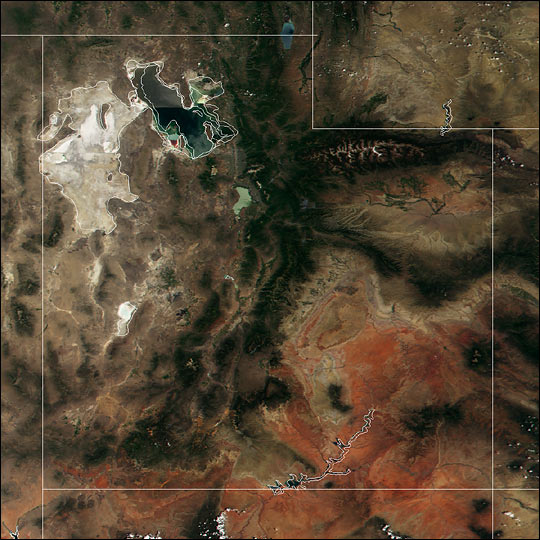 With its myriad of canyons, unusual rock formations and ancient lakebeds, Utah is a geologist's playground. This true-color image of Utah was acquired on June 20, 2000, by the Moderate-resolution Imaging Spectroradiometer (MODIS), flying aboard NASA’s Terra spacecraft.

The dark aquamarine feature in the northern part of the state is the Great Salt Lake. Fourteen thousand years ago, the Great Salt Lake was part of Lake Bonneville, which covered much of northern and western Utah. The extent of the lakebed can be seen in light tan covering much of northern and western Utah and extending into Idaho. (Click for more details on the history of Lake Bonneville.)

The dark bands running through the center and northeastern part of the state are the western edge of the Rockies. The dark color is likely due to the coniferous vegetation that grows along the range. The tallest mountains in the Utah Rockies are the Uinta Mountains, which can be seen in the northeastern corner of the state bordering Colorado and Wyoming. The white fishbone pattern in the center of the Uinta Mountains is snow that hadn’t yet melted.

To the southeast, one can see the reddish-orange rocks of the northernmost section of the Colorado Plateau. Utah’s well-known desert attractions, including Arches National Park, Canyonlands National Park, and Glen Canyon, are located in this region. The long, narrow lake is Lake Powell, created after the construction of Glen Canyon Dam in the 1950s.