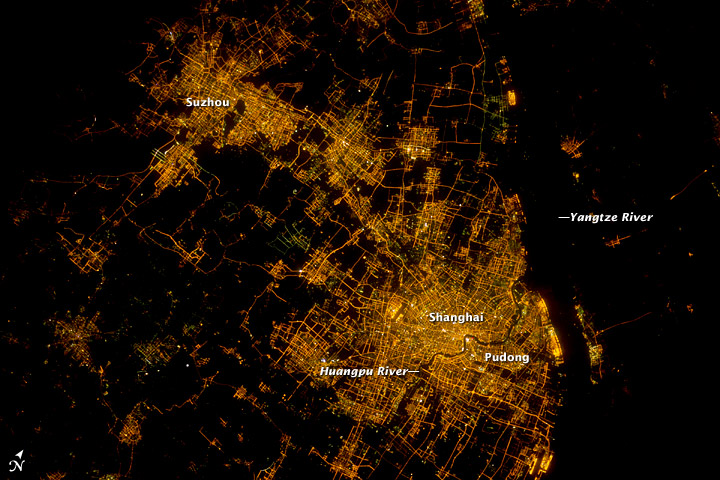 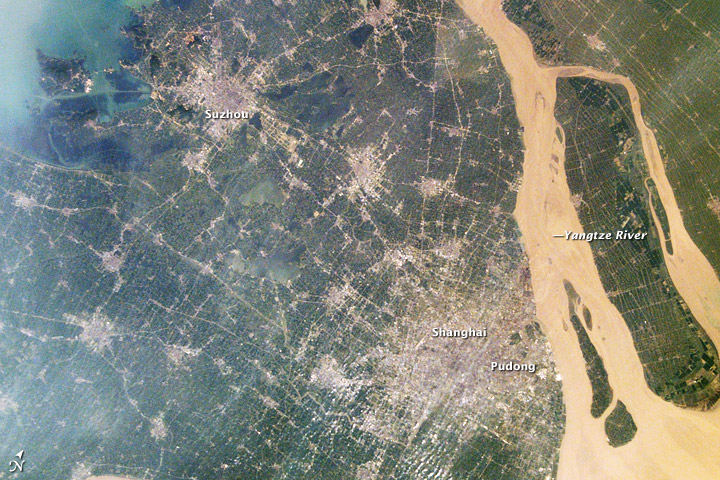 The city of Shanghai sits along the delta banks of the Yangtze River along the eastern coast of China. The city proper is the world’s most populous city (the 2010 census counts 23 million people, including “unregistered” residents). With that many humans, the city is a tremendous sight at night. Shanghai is a key financial capital for China and the Asian Pacific region. The bright lights of the city center and the distinctive new skyscrapers that form the skyline along the Pudong district (the eastern shore of the Huangpu River, a tributary of the Yangtze that cuts through the center of Shanghai) make for spectacular night viewing both on the ground and from space.

Many of China’s cities have grown at tremendous rates, but comparison between a 2012 night time image (above, top) and 2002 day time image (above, lower) taken from the International Space Station provides an indication of how much development has occurred in the Shanghai region over the past 10 years. The official census count in 2000 was 16.4 million; the city population has increased more than 35% since that time. Much of the growth has occurred in new satellite developments like areas to the west of the city (for example, Suzhou).

Shanghai’s history is also colorful. The area started as an agricultural community more than 1,000 years ago. A trading and merchant economy developed, growing into a trading port and exporting cotton, silk, and fertilizer during the 1700s and early 1800s. Shanghai also figured prominently in the First Opium War, and became a British treaty port after the Nanjing Treaty (1842).

The city’s rapid growth and development during the 20th and 21st centuries have come at a cost. Water availability is a key concern, and groundwater withdrawal has resulted in substantial subsidence in and around the city. Because it is built only a few meters above sea level—on the banks of the deltaic estuary of the Yangtze River—curbing subsidence rates is a critical concern.

Astronaut photograph ISS030-E-188071 was acquired on March 27, 2012 with a Nikon D3S digital camera using an 85 mm lens. The image was taken by the Expedition 30 crew. Astronaut photograph ISS005-E-10633 was acquired on August 22, 2002 with a Kodak DCS760c digital camera using a 38 mm lens. The image was taken by the Expedition 5 crew. Both images are provided by the ISS Crew Earth Observations experiment and the Image Science & Analysis Laboratory, Johnson Space Center. The images in this article have been cropped and enhanced to improve contrast. Lens artifacts have been removed. The International Space Station Program supports the laboratory as part of the ISS National Lab to help astronauts take pictures of Earth that will be of the greatest value to scientists and the public, and to make those images freely available on the Internet. Additional images taken by astronauts and cosmonauts can be viewed at the NASA/JSC Gateway to Astronaut Photography of Earth. Caption by Cynthia A. Evans at NASA-JSC.