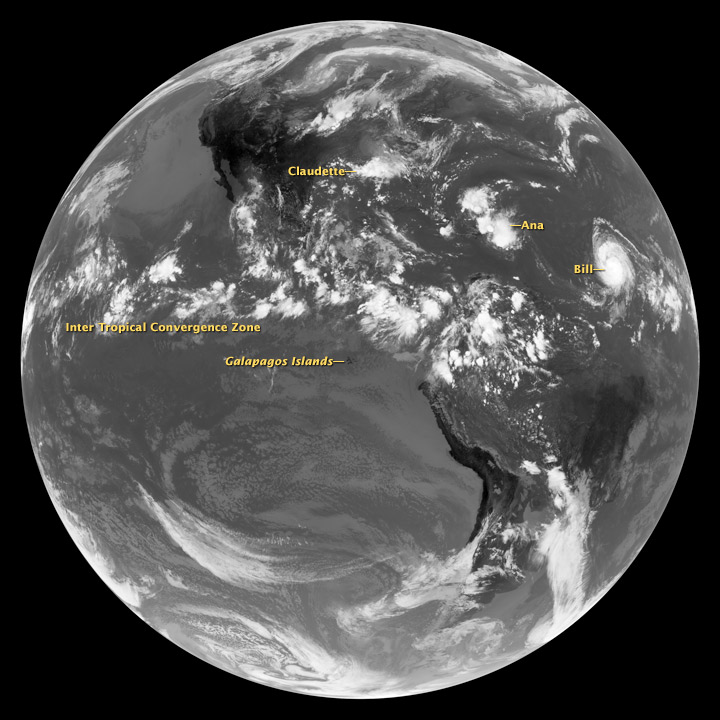 Remote-sensing scientists call a satellite image that captures an entire hemisphere of the Earth in one view a “full-disk” image. The delivery of the first full-disk image from a newly launched weather satellite is an exciting milestone in the mission. It provides scientists and engineers with incontrovertible evidence that a new satellite—as well as the communications systems needed to deliver the images back to Earth—is ready to do its job.

On August 17, 2009, at 1:31 p.m. EST, the latest NASA/NOAA geostationary weather satellite, called GOES-14, returned its first full-disk thermal infrared (IR) image, showing radiation with a wavelength of 10.7 micrometers emanating from Earth. Infrared images are useful because they provide information about temperatures. A wavelength of 10.7 micrometers is 15 times longer than the longest wavelength of light (red) that people can see, but scientists can turn the data into a picture by having a computer display cold temperatures as bright white and hot temperatures as black. The hottest (blackest) features in the scene are land surfaces; the coldest (whitest) features in the scene are clouds.

In the heat of the midday sun, the exposed rock in sparsely vegetated mountain ranges and high-altitude deserts in western North and South America are dark. In North America, the temperatures cool (fade to lighter gray) along a gradient from west to east, as the semi-deserts of the West and Southwest transition to the grasslands and croplands of the Great Plains, which transition to forests in the East.

A band of scattered storms across the equatorial Pacific shows the location of the Intertropical Convergence Zone, which is a belt of showers and thunderstorms that persists near the equator year round. Need help precisely locating the equator? Look for the dark (hot) spots in the Pacific Ocean west of South America: those are the Galapagos Islands, and the equator passes through the northern tip of the largest island.

Perhaps the most significant features related to U.S. weather appear in the upper right quadrant of the disk: the remnants of Tropical Storm Claudette drenching the eastern Gulf Coast, Tropical Depression Ana unwinding over Puerto Rico and the Dominican Republic, and Hurricane Bill approaching from the central Atlantic.

Currently, GOES-11 is serving as GOES-West and GOES-12 is serving as GOES-East. The two back up satellites are GOES-13, and now, GOES-14, which launched as GOES-O on June 27, 2009. After a six-month testing period, GOES-14 will be put into “hibernation”and stored on orbit.

The first full-disk thermal image from the newest NASA/NOAA weather satellite shows the remnants of Tropical Storm Claudette and Tropical Depression Ana, as well as Hurricane Bill on August 17, 2009.