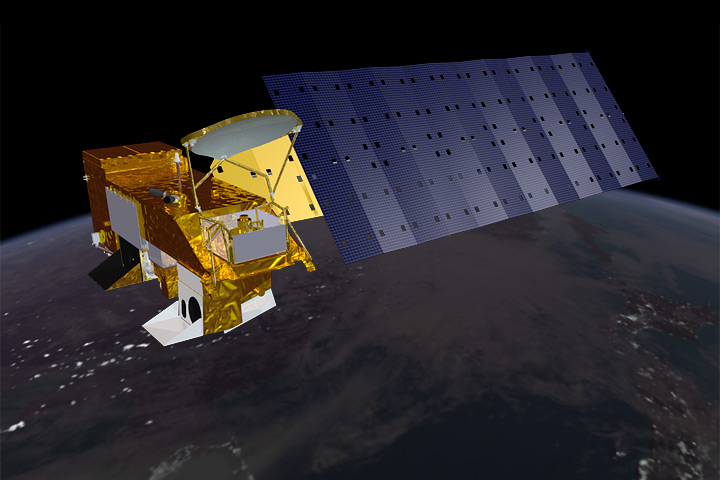 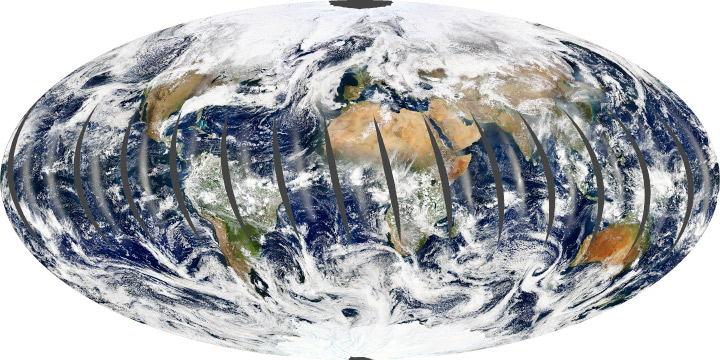 NASA monitors the health of our planet with a constellation of satellites. The Aqua satellite, shown at top, uses the Latin name for water, and it carries a suite of sensors specially designed for observing all parts of Earth’s water cycle, including water on land, in the oceans, and in the atmosphere. Aqua follows a kind of polar orbit known as a Sun-synchronous orbit, which means it crosses the equator at the same local time during each pass. Aqua’s orbit ascends from south to north during the daylight hours, crosses near the North Pole, circles around Earth’s nighttime side, and crosses near the South Pole to return to the daytime side.

Aqua passes over Earth’s equator between 1:30 and 1:45 p.m. local time on each daytime orbit. This precise timing of orbits ensures that Aqua takes consistent measurements of Earth system processes, enabling scientists to make valid comparisons between data observed on different dates. But polar-orbiting satellites are influenced by the gravity of both the Sun and the Moon, which can pull them off their intended course into an east-west-leaning orbit. To compensate for these gravitational pulls, engineers at Aqua’s Mission Conrol Center at NASA Goddard Space Flight Center must give the satellite orbit the occasional tune-up. For a look at one such tune-up, see the Earth Observatory feature story Flying Steady: Mission Control Tunes Up Aqua’s Orbit.

The bottom image, from March 16, 2009, shows how over the course of a day, Aqua’s orbit allows one of its sensors, the Moderate Resolution Imaging Spectroradiometer, to create a nearly complete picture of Earth. MODIS’ field of view is a little more than 2,000 kilometers wide, and near the poles, the distance around the Earth along any given line of latitude is small enough for MODIS to see everything (in other words, the images from adjacent passes overlap). Near the equator, where the distance around is bigger, gaps appear between each orbital overpass. “Pole holes” over the North and South Poles occur because there was not enough daylight in mid-March at those latitudes for the sensor to capture a photo-like image.