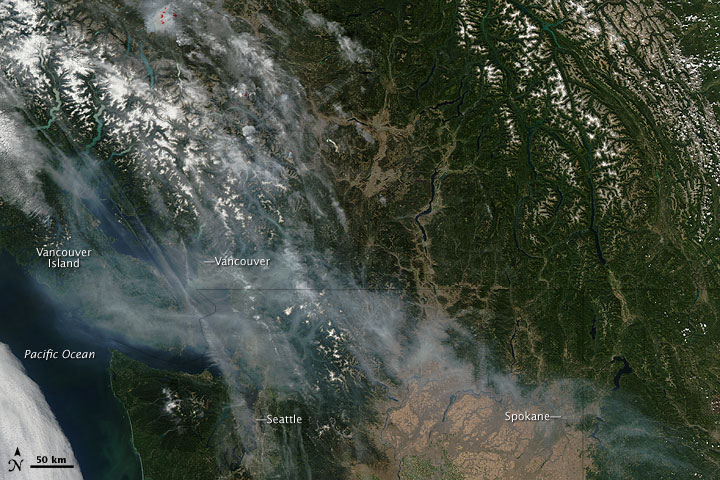 Fires in British Columbia smothered parts of that province as well as Washington state with thick smoke on August 19, 2009. The Moderate Resolution Imaging Spectroradiometer (MODIS) on NASA’s Aqua satellite captured this true-color image the same day.

Near the top edge of the image is a cluster of red dots—hotspots where MODIS detected unusually warm surface temperatures associated with wildfires. From these fires, smoke blows toward the southeast, and another thick plume hovers over Vancouver Island in the southwest. Both the island and city of Vancouver are almost completely hidden by thick smoke. Skies also appear smoky over Seattle, and visible smoke travels as far as Spokane.

Fires had been burning in British Columbia since early August 2009. According to the U.S. Air Quality “Smog Blog,” moderately dense to dense smoke covered parts of northern Washington, Idaho, and southern British Columbia on August 19.

Besides a thick haze of smoke, this image also captures a dramatic change in land cover in Washington state, changing from densely vegetated near the Pacific Coast to sparsely vegetated on the Columbia River Plateau near the Idaho border.

Hundreds of fires are burning in the Canadian province.

Image of the Day Heat Land Fires Snow and Ice