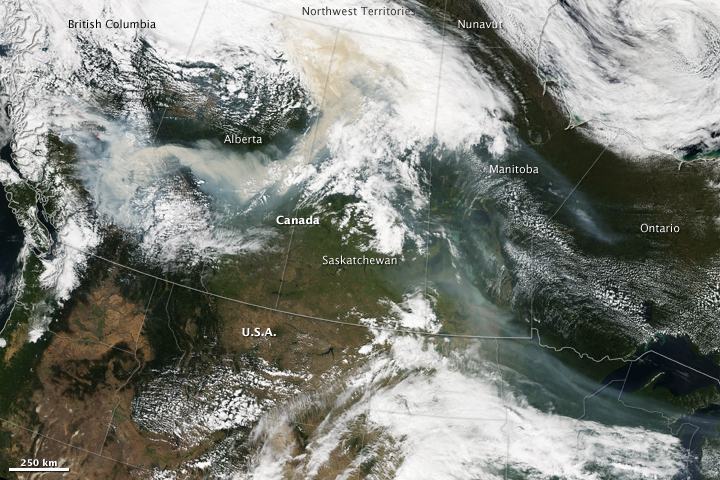 Forest fires burning in the mountains of British Columbia, Canada, threatened air quality hundreds of kilometers away in mid-August 2010. This true-color image shows the smoke on the afternoon of August 19. The fires are marked with tiny red dots on the left side of the image. A plume of dense brown smoke extends from the fires in British Columbia, across Alberta and into Saskatchewan. A second, thinner plume flows south from Saskatchewan and into Manitoba, Ontario, Minnesota, Wisconsin, and Michigan.

On August 20, the Saskatchewan Health Ministry warned the public that the smoke would lower visibility and degrade air quality in parts of the province for a few days, reported the Canadian Broadcasting Corporation News. Residents were advised to stay indoors while the heavy smoke was in the air.

The Moderate Resolution Imaging Spectroradiometer (MODIS) on NASA’s Aqua satellite acquired this image in two consecutive overpasses on the afternoon of August 19.