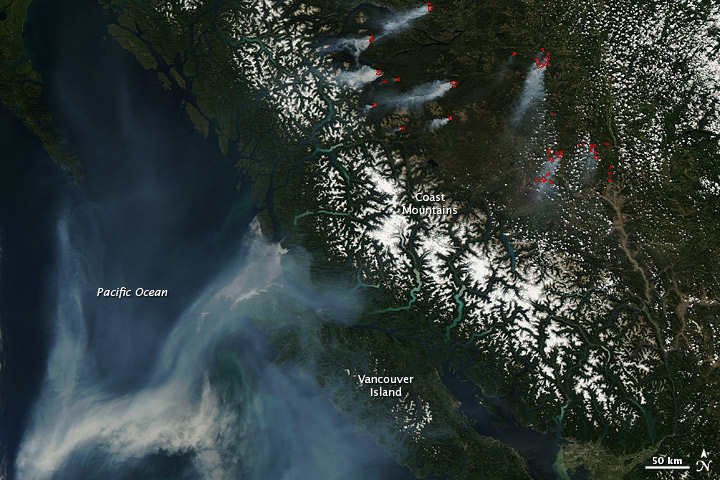 Multiple clusters of fires burned in British Columbia, sending a thick plume of smoke over the Pacific Ocean in mid-August 2010. The Moderate Resolution Imaging Spectroradiometer (MODIS) on NASA’s Aqua satellite captured this natural-color image on August 13.

East of the snowcapped Coast Mountains, numerous fires, many of them clustered into large groups, send smoke plumes toward the south-southwest and west-southwest. Red outlines—most of them at the bases of smoke plumes—indicate unusually high surface temperatures associated with actively burning fires. Over the Pacific Ocean, smoke has coalesced into a large plume that blows past the northwestern tip of Vancouver Island. Over the Coast Mountains, skies are clear. The clear-sky gap between the active fires and the plume over the Pacific might result from a temporary shift in wind direction.

On August 15, 2010, the Canadian Interagency Forest Fire Centre reported that, over the previous 24 hours, a dozen new fires had started in British Columbia, half of them from lightning, and the other half from human activity. As of August 15, a total of 201 fires were burning in the province, although 152 of them were under control. On August 16, The Globe and Mail reported that more than three-fourths of British Columbia was under high or extreme wildfire danger, following a weekend of scorching temperatures.