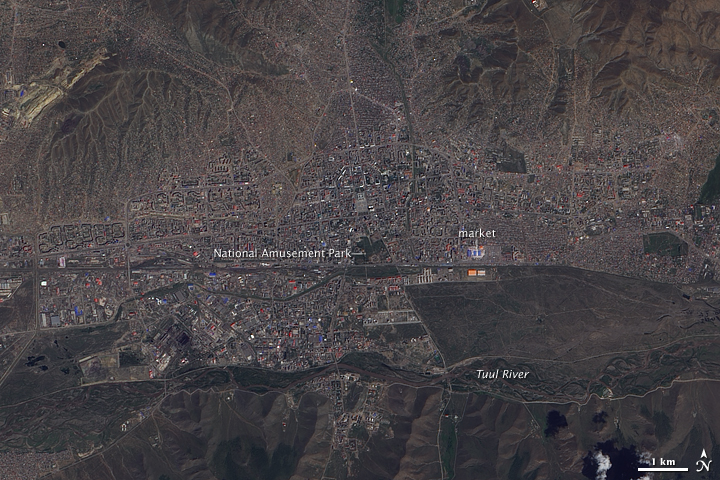 Mongolia’s capital city of Ulaanbaatar (also Ulan Bator) occupies a valley along the Tuul River. Roughly 1,350 meters (4,430 feet) above sea level, and over 47 degrees north of the Equator, the city rests atop a sporadic permafrost zone, and ranks among the world’s coldest national capitals. Winters are typically long and dry, and summers are typically short and wet.

The Advanced Land Imager (ALI) on NASA’s Earth Observing-1 (EO-1) satellite acquired this true-color image on July 24, 2009. Ulaanbaatar lies primarily north of the Tuul River, with just a small settled area south of the river. Most of the city actually lies north of one main thoroughfare that runs from east to west. The city’s blue-roofed market appears north of the roadway. West of the market is the National Amusement Park, known for its artificial lake and castle. Throughout the city, red-orange and blue roofs provide small patches of bright color in a cityscape of earth tones. Along the city’s margins, human habitations dot slopes of nearby hills.

Although artifacts indicate human settlement in the area since prehistoric times, the city of Ulaanbaatar wasn’t established in its current place until the late eighteenth century. For roughly 150 years before that time, the city that would become Ulaanbaatar was a mobile monastery and town composed of movable yurts or gers. These portable structures continue to serve as homes today, partly because they do not require digging into the area’s often frozen soil. The largest city near the fossil-rich Gobi Desert, Ulaanbaatar has become a jumping-off point for generations of paleontologists.

Located in a high, cool, arid region, Ulaanbaatar has long lacked abundant water, prompting World Bank projects to improve the water supply. Despite a chronic lack of water, the area experienced a severe flood in mid-July 2009, destroying homes and contaminating what water residents did have. The flood was considered the worst in over 40 years.