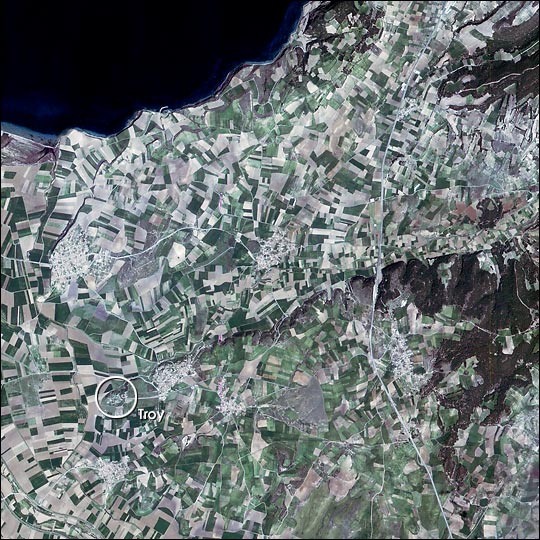 During the Golden Age of Greece the poet Homer wrote of the epic battles between Agamemnon and Priam—the fabled Trojan War. Although the city of Troy was a tourist attraction in Greek and Roman times, by the 1800s its location was lost, and many believed the story was only a myth. Frank Calvert and Heinrich Schliemann thought otherwise, and in the 1870s began excavating an earthen mound in western Turkey, near the Dardanelles. The site did indeed turn out to be the legendary city of Troy, and much more. Different layers—each corresponding to a different city—revealed evidence of a sequence (progression) of human habitation stretching back almost 5000 years.

Although the ruins of Troy have been explored for 130 years, archaeologists have only excavated 10 percent of the site. To help them, NASA scientists are exploring new ways of using remote sensing data. The image above shows Troy and the surrounding image in true color. Taken by the Advanced Land Imager (ALI) aboard the EO-1 satellite, the full-size image has a resolution of 10 meters. The city of Troy is circled, and the body of water to the north is the Dardanelles. These and other sensors may help find the boundaries of a harbor near Trojan-war era Troy that has since filled with sediment, trace the route of a Roman aqueduct that carried water to the city 2000 years ago, locate an ancient cemetary, and map the outer walls.

A high-resolution image of Troy from the Ikonos satellite, posted previously on the Earth Observatory, reveals more details of the city.