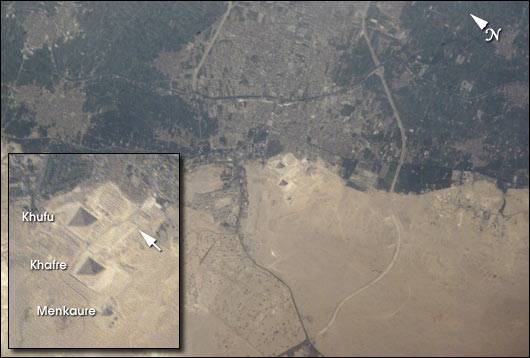 One of the world’s most famous archaeological sites has been photographed in amazing detail by the astronauts onboard Space Station Alpha. This image, taken 15 August, 2001, represents the greatest detail of the Giza plateau captured from a human-occupied spacecraft (approximate 7 m resolution). Afternoon sun casts shadows that help the eye make out the large pyramids of Khufu, Khafre and Menkaure. Sets of three smaller queens’ pyramids can be seen to the east of the Pyramid of Khufu and south of the Pyramid of Menkaure. The light-colored causeway stretching from the Mortuary Temple at the Pyramid of Khafre to the Valley Temple near the Sphinx (arrow) can also be seen. Because it is not tall enough to cast a deep shadow, the Sphinx itself cannot readily be distinguished.

Although some commercial satellites, such as IKONOS, have imaged the Pyramids at Giza in greater detail (1 m resolution), this image highlights the potential of the International Space Station as a remote sensing platform. A commercial digital camera without space modifications was used to obtain this picture. Similarly, a variety of remote sensing instruments developed for use on aircraft can potentially be used from the Space Station.

Currently, all photographs of Earth taken by astronauts from the Space Shuttle and Space Station are released to the public for scientific and educational benefit and can be accessed on the World Wide Web through the NASA-JSC Gateway to Astronaut Photography of Earth (http://eol/jsc.nasa.gov/sseop). Image ISS003-ESC-5120 was provided by the Earth Sciences and Image Analysis Laboratory at Johnson Space Center (http://eol.jsc.nasa.gov).