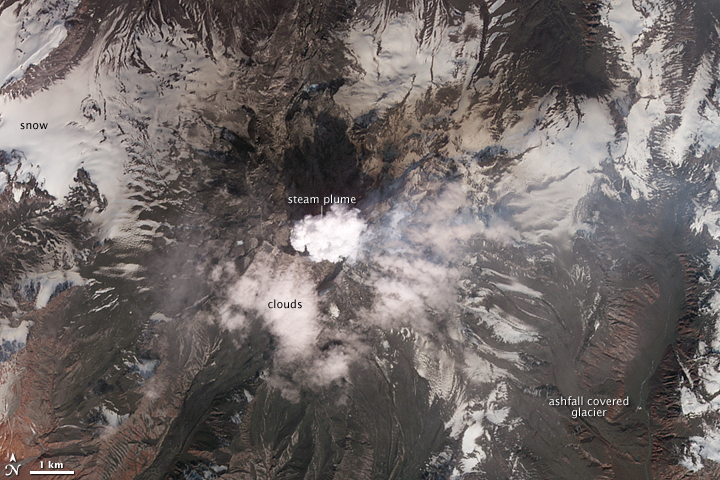 In early May 2009, the Alaska Volcano Observatory (AVO) warned that Mount Redoubt could erupt explosively at any time with little or no warning. The AVO cited the volcano’s seismic activity, gaseous output, and lava-dome growth as reasons for concern. The AVO warned that a collapse of the lava dome could send significant amounts of ash and meltwater down nearby Drift Glacier.

The Advanced Spaceborne Thermal Emission and Reflection Radiometer (ASTER) on NASA’s Terra satellite acquired this image of Mount Redoubt and its surroundings on May 5, 2009, when the volcano exhibited little visible activity besides a plume of vapor. In this false-color image made from a combination of visible and infrared light, the bright white steam plume hovers over the volcano’s summit. Immediately southwest of this plume, clouds appear fairly thin and dull. North of the volcano, pristine snow rests on the land surface, but southeast of the volcano, ashfall from earlier eruptions has stained the icy surface. (In the large image, the vegetation in the coastal areas and in river valeys is red.)