View of Earth from MESSENGER 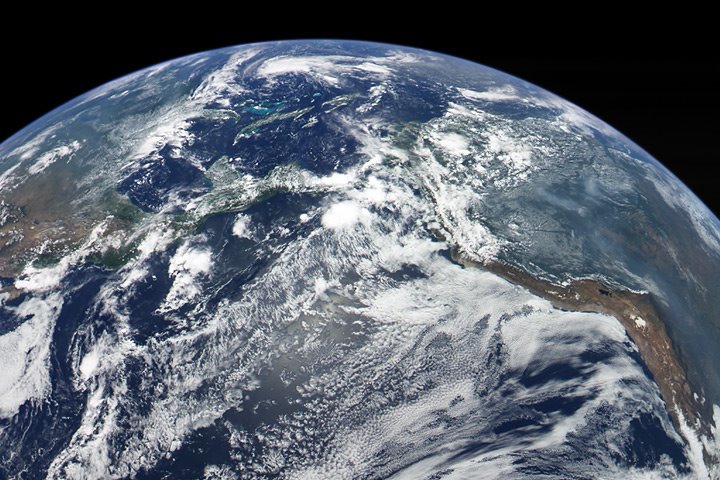 Launched on August 3, 2004, NASA’s Mercury MESSENGER spacecraft has been rocketing around the inner solar system for the past few years, doing flybys of Earth, Venus, and its primary target—Mercury—as it prepares for the final phase of its mission. If all goes as planned, MESSENGER will enter Mercury orbit in March 2011, and it will spend a year observing the planet’s composition, magnetic field, geology, and exosphere.

On August 2, 2005, MESSENGER did a flyby of Earth, whipping around the planet at an altitude (at closest approach) of 2,348 kilometers (1,459 miles) and a maximum speed (relative to the ground) of nearly 11 kilometers per second (7 miles per second). This tremendous distance and speed meant that MESSENGER could provide no more than a fleeting glimpse of the Earth below, but the view’s unique perspective makes it worth sharing. This image shows the Pacific Ocean in the center, South America on the right and North America on the left. Smoke from fires in the Amazon obscured the lush vegetation of the rainforest, while just left of the apex of the globe, Tropical Storm Harvey was taking shape in the Atlantic Ocean.

The Earth Observatory previously published a view of Earth from earlier in the flyby when South America and Africa were in view. Movies of the flyby are available on the MESSENGER Project Webpage.

This image of Earth was captured by the MESSENGER spacecraft during a flyby of our home planet on August 2, 2005. Parts of South and North America were in view.