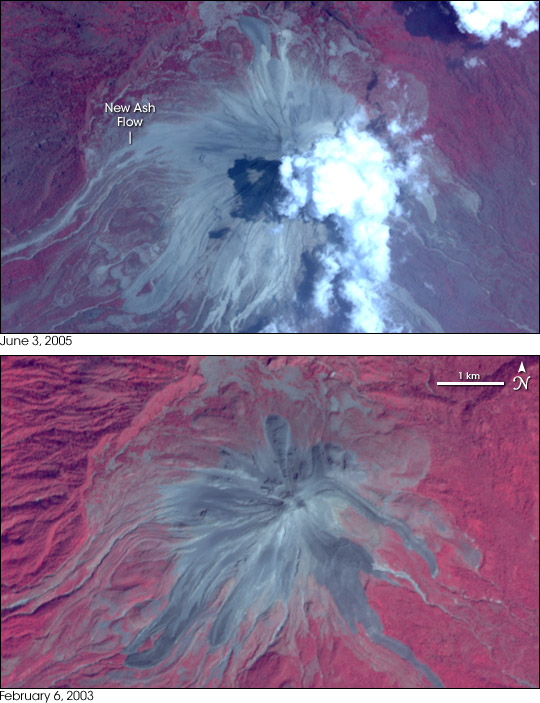 A series of explosive eruptions have thundered from the Colima Volcano, Mexico's most active volcano. The Advanced Spaceborne Thermal Emission and Reflection Radiometer (ASTER) captured the top image of the Colima volcano on June 3, 2005, just hours after two spectacular eruptions rumbled from the volcano. Two days later, on June 5, Colima experienced its strongest eruption in 20 years when it sent a dark column of ash more than five kilometers into the atmosphere at a rate of roughly 30 kilometers per hour, reports the Universidad de Colima's Observatorio Vulcanologico.

Colima also erupted on May 24 and May 30, and the ash from these and the June 2 and June 3 eruptions is clearly visible in the top image. A grey river of ash and rock flows down the west side of the peak, covering the vegetation that was visible on February 6, 2003, lower image. In these false-color images, the dense vegetation that surrounds the volcano is red. A light dusting of ash blankets the trees on the southeast side of the volcano, and fresh flows stream down all sides of the volcano. Because of its resemblance to the cloud in the upper right corner of the image, the cloud that rests over the summit of the volcano is probably a regular cloud, though it could also be a plume of steam.