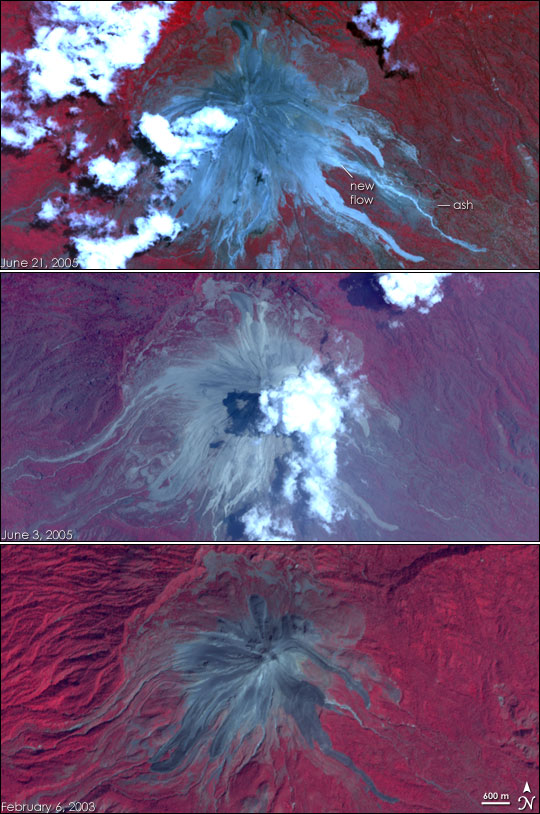 Recurring eruptions of the Colima Volcanco have left visible changes on the local landscape since February 2003. The Advanced Spaceborne Thermal Emission and Reflection Radiometer (ASTER) flying on NASA’s Terra satellite, captured images of the Colima Volcano on June 21, 2005 (top), June 3, 2005 (middle), and February 6, 2003 (bottom). In these false-color images, vegetation appears in red, and rock and ash flows appear in gray. Between June 3 and June 21, eruptions sent a silvery gray stream of ash and rock down the east side of the mountain and dusted the forest with ash. In contrast to February 2003, the area covered by rock and ash has expanded in both 2005 images. The white clouds seen in both June images may be steam from the volcano but are more likely clouds passing overhead.

Recorded eruptions of the Colima Volcano date back to the 16th century, and a major eruption in 1913 destroyed the volcano’s summit. Volcanoes pose multiple hazards, many of which have been felt by local residents. According to news reports, repeated eruptions since early May 2005 have prompted evacuations of nearby communities. Ash fall has covered local highways, forced a temporary closure of Colima International Airport, and even killed some local livestock.