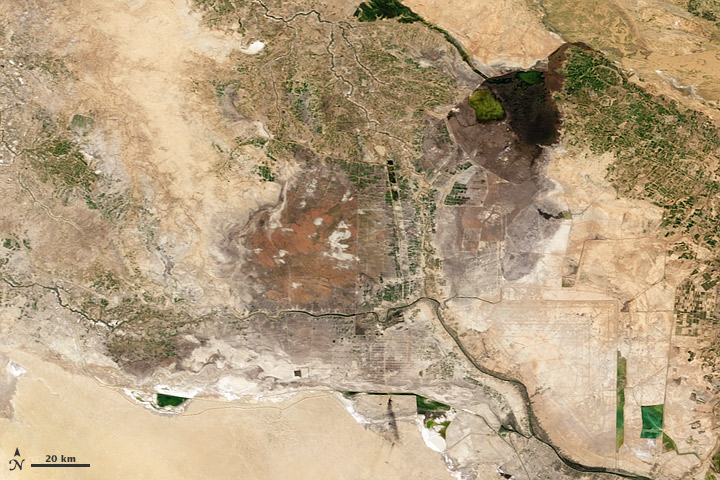 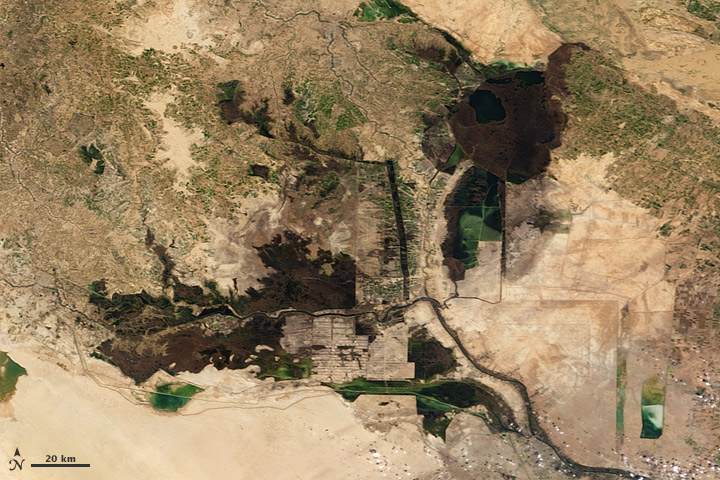 At the start of the twenty-first century, the once-lush, richly diverse wetlands of Mesopotamia, between the Tigris and Euphrates Rivers in southern Iraq, had been decimated by the cumulative effects of flood control, hydroelectric dams, and irrigation. They suffered a final deadly blow in the 1990s, when Iraqi leader Saddam Hussein drained large areas at least partly in retaliation for anti-government rebellions by the tribes living there. In 2003, after the Persian Gulf War, locals began demolishing the dikes and canals that had drained the marshes, and the wetlands began to be flooded once again.

This pair of images from the Moderate Resolution Imaging Spectroradiometer (MODIS) on NASA’s Terra satellite features 2 of the 10 images included in the Mesopotamian Marshes collection in our World of Change series. The pair shows the marshes in February 2002 (top), near the peak of their desiccation, and in February 2007 (bottom), after several years of recovery.

In 2002, the wedge of land between the Tigris (flowing into the scene from near top center) and the Euphrates (flowing in from near left center) was reduced to a few small green patches and bare soil, varying in shades from purplish brown to pale beige. (The bright green vegetation is likely irrigated cropland, not marsh vegetation.) The largest remnant marsh, Al Hawizeh, had retreated all the way northeast to the border with Iran (top right).

By 2007, a dramatic transformation had taken place in Mesopotamia. Several large marsh areas north and south of the Euphrates had been re-flooded, and the dry land south of Al Hawizeh Marsh was being systematically filled. Standing water created small black (dark blue) ponds amid the dense wetland vegetation. The vegetation had an unusual reddish-brown color. Although the color would suggest that the plants were dormant or dead, that appearance must be a unique characteristic of the marsh plants growing there: a false-color image that includes shortwave and near-infrared light reveals that the ground is clearly covered with vegetation, which appears bright green.

After two years of field research, Iraqi and American scientists concluded that there had been a “remarkable rate of reestablishment of native macroinvertebrates, macrophytes, fish, and birds in re-flooded marshes.” However, the lack of connectedness among the various re-flooded marshes remained a concern for species diversity and local extinction. In addition, the volume of water that flowed into the marshes in the first years of restoration may not be able to be sustained as the country stabilizes and economic and agricultural activity resumes. Therefore, the ultimate fate of Mesopotamian marshes is still uncertain.