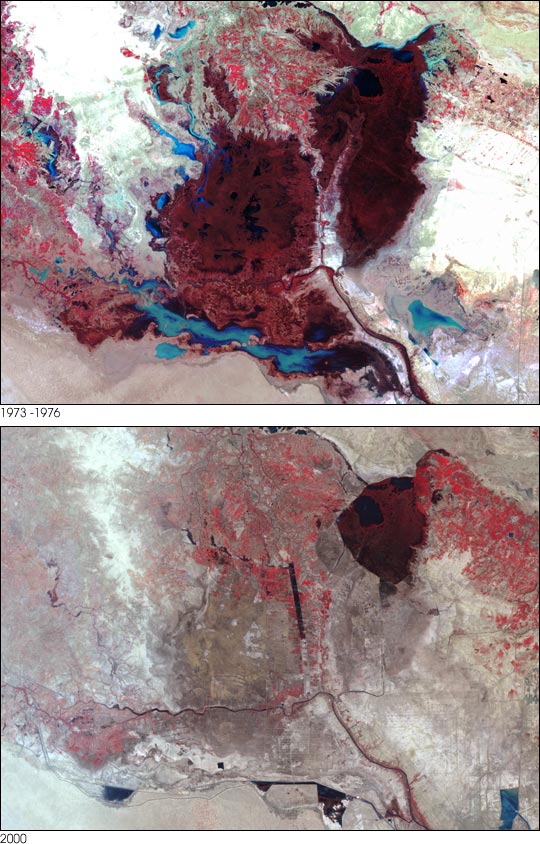 Landsat satellite imagery reveals that in the last 10 years, wetlands that once covered as much as 20,000 square km (7,725 square miles) in parts of Iraq and Iran have been reduced to about 15 percent of their original size. Through the damming and siphoning off of waters from the Tigris and Euphrates Rivers, the ecosystem has been decimated and, as a result, a number of plant and animal species face possible extinction.

The top image is a false-color composite made from data collected by the Multi-Spectral Scanner (MSS) aboard Landsat from 1973-76. Four Landsat scenes were stitched together to make an image of the whole region. In this scene, dense marsh vegetation (mainly phragmites, or marsh grass) appears as dark red patches. The elongated red patches along the banks of the Shatt-al-Arab River are Date Palm groves. The Shatt-al-Arab begins where the Tigris and Euphrates meet and carries their waters southeastward into the Persian Gulf.

The middle image (not shown above; click to see the full resolution) shows the state of the marshlands on September 7, 1990, shortly after the Iran-Iraq war. This image was acquired by the MSS aboard Landsat 5. The scene reveals that a large eastern swath of the Central and Al Hammar Marshes as well as the northwestern and southern fringes of the Al Hawizeh Marsh (the large red areas immediately above and below the Euphrates River, running west to east toward the bottom of this scene) had dried out as a result of causeways constructed to ease military transport in otherwise difficult terrain.

The bottom image is a false-color composite of data from the Landsat 7 Enhanced Thematic Mapper Plus (ETM+), acquired on March 26 and May 4, 2000. In this scene, most of the Central Marshes appear as olive to greyish-brown patches indicating low vegetation cover on moist to dry ground. The very light to grey patches are areas of exposed ground with no vegetation, which may actually be salt flats where before there were lakes. The Al Hawizeh Marsh (straddling the Iran-Iraq border just east of the Tigris River) appears to be all that remains of the region's natural wetlands, and it has been reduced in size by about half.

Today, river flow into the Mesopotamian marshlands has been cut by 20-50 percent, and the spring floods that sustained the marshlands have been eliminated. The end result is what was once a lush wetland environment roughly the size of the state of New Jersey has been reduced by about 85 percent in area to roughly the size of the small island nation of the Bahamas. What was once a vast, interconnected mosaic of densely-vegetated marshlands and lakes, teeming with life, is now mostly lifeless desert and salt-encrusted lakebeds and riverbeds.

Even for the 1,270 square km (490 square miles) of marshlands that still remain, quality of life has been adversely impacted by a decline in water quality. Human irrigation practices render the Tigris and Euphrates waters saltier than they originally were. And, with the boom in agriculture, there have been dramatic increases in the levels of chemicals as well as a rise in urban and industrial effluents in the rivers. Conversely, most of the load of natural sediments and silts the rivers used to carry now remains trapped behind multiple dams. Lower levels of silt decrease plankton and levels of organic carbon in the water which, in turn, adversely affect fish populations as well as soil fertility along the riverbanks and in the marshlands.

All of these negative trends point to the inevitable demise of the Mesopotamian marshland ecosystem within 2-3 years unless steps are taken soon to reverse the damage being done. Regarded by historians as one of the cradles of civilization, the Mesopotamian Fertile Crescent has supported Marsh Arab society for millennia. The culture of the half million or so Marsh Arabs living in the region is rooted in the dawn of human history, dating back to ancient Sumeria about 5,000 years ago.

This caption was based upon a study conducted by United Nation Environment Programme’s Division of Early Warning and Assessment. Click to access the entire UNEP report (in PDF format), entitled The Mesopotamian Marshlands: Demise of an Ecosystem. [Print Resolution (13.3 MB)]

The Al Hawizah Marshes comprise the largest remaining tract of wetlands in the Mesopotamian Marshlands of Iran and Iraq. In the last 10 years, damming and diversion of waters from the Tigris and Euphrates Rivers, and draining of wetlands has led to a loss of 85% of wetlands that once covered about 20,000 square km (7,725 square miles).