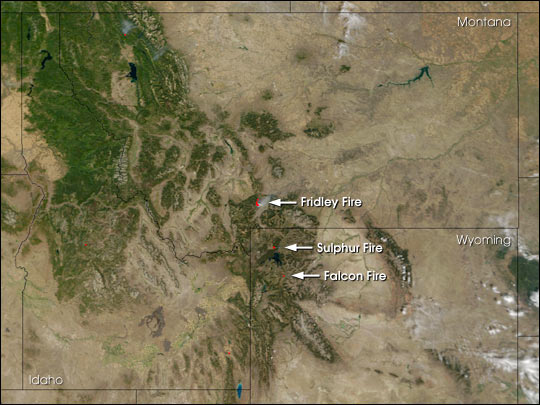 In Montana, the Fridley Fire in Gallatin National Forest, which was started by lightning on August 19, continues to burn. The National Interagency Fire Center reports that the fire is estimated to have consumed about 24,000 acres as of August 27, and is only 15 percent contained. MODIS also detected fire north of Flathead Lake in northwestern Montana, as well as fires in central and southeastern Idaho.

Along the border between Idaho and Montana, in the dark green forests of the Sawtooth and Bitteroot mountain ranges, brown-colored burn scars reveal the location of last year’s extensive fires.

Yellowstone National Park in the far northwest corner of Wyoming is also fighting wildfires. According to National Park Service reports, the Sulphur Fire, located north of Yellowstone Lake, was started by lightning, and had burned about 250 acres as of August 26, 2001. To the south of the lake is the larger Falcon Fire, which had burned 2,340 acres as of August 26, with at least 670 of those acres within park boundaries, including some land that was previously burned in the extensive Yellowstone fires in 1988.

The large image shows many of the significant geological, hydrological and ecological features of the region. At the bottom center of the image is Utah’s Great Salt Lake, with the Salt Lake Desert to the west. Irrigated land in the Snake River Plain makes a speckled green crescent across the southern part of Idaho. Against the paler soils of the Plain, ancient lava flows stand out in dark brown. In the upper left, the blue ribbon of the Columbia River meanders through northeastern Washington. Running through the image’s center are the ranges that make up the Northern Rocky Mountains, whose extreme remoteness and ruggedness gave rise to place names such as Central Idaho’s “River of No Return Wilderness.”

Wildfires in Montana and Wyoming