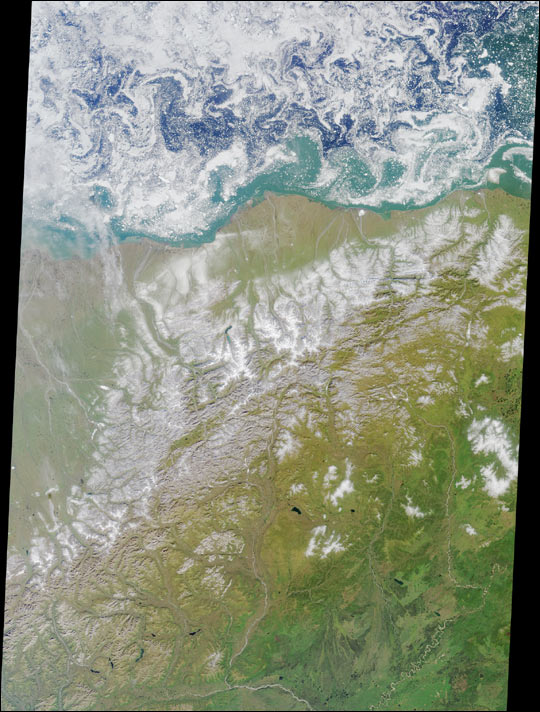 This colorful image of the Arctic National Wildlife Refuge and the Beaufort Sea was acquired by the Multi-angle Imaging SpectroRadiometer’s nadir (vertical-viewing) camera on August 16, 2000. The swirling patterns apparent on the Beaufort Sea are small ice floes driven by turbulent water patterns, or eddies, caused by the interactions of water masses of differing salinity and temperature. By this time of year, all of the seasonal ice which surrounds the north coast of Alaska in winter has broken up, although the perennial pack ice remains further north. The morphology of the perennial ice pack’s edge varies in response to the prevailing wind. If the wind is blowing strongly toward the perennial pack (that is, to the north), the ice edge will be more compact. In this image the ice edge is diffuse, and the patterns reflected by the ice floes indicate fairly calm weather.

The Arctic National Wildlife Refuge (often abbreviated to ANWR) was established by President Eisenhower in 1960, and is the largest wildlife refuge in the United States. Animals of the Refuge include the 130,000-member Porcupine caribou herd, 180 species of birds from four continents, wolves, wolverine, polar and grizzly bears, muskoxen, foxes, and over 40 species of coastal and freshwater fish. Although most of ANWR was designated as wilderness in 1980, the area along the coastal plain was set aside so that the oil and gas reserves beneath the tundra could be studied. Drilling remains a topic of contention, and an energy bill allowing North Slope oil development to extend onto the coastal plain of the Refuge was approved by the US House of Representatives on August 2, 2001.

The Refuge encompasses an impressive variety of arctic and subarctic ecosystems, including coastal lagoons, barrier islands, arctic tundra, and mountainous terrain. Of all these, the arctic tundra is the landscape judged most important for wildlife. From the coast inland to an average of 30-60 kilometers, arctic tundra dominates the coastal plain, until reaching the foothills of the Brooks Mountain Range. Beneath the tundra, a layer of permafrost reaches an average depth of 600 meters, restricting water drainage through the soil, and increasing the sensitivity of tundra vegetation to disturbance. Precipitation is scarce (less than 16 centimeters per year) and the small amount of melt water or rain that soaks into the tundra remains near the surface. This is why the coastal plain can be classified as a wetland.

The western boundary of the Refuge is marked by the Canning River, about halfway between the center and left-hand side of the image, and the eastern boundary is near the right-hand edge at the US/Canadian border. The two permanent human settlements within the image area are Kaktovic near the tip of the large rounded peninsula, and Arctic Village south of the Brooks Range near the southern Refuge boundary. The area represented by the image is approximately 380 kilometers x 540 kilometers.