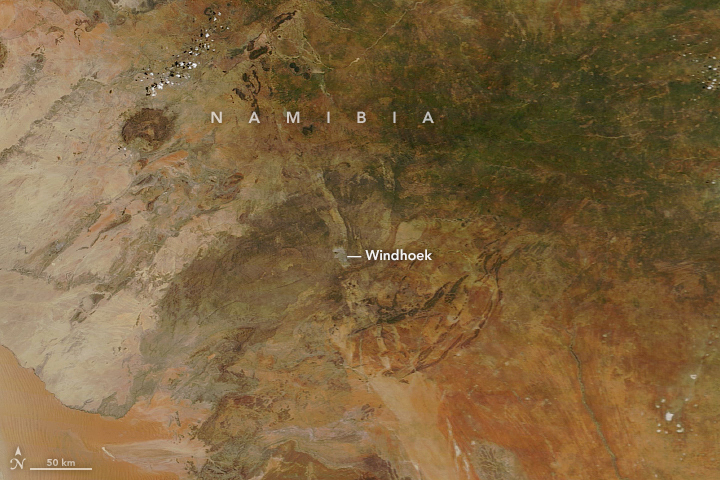 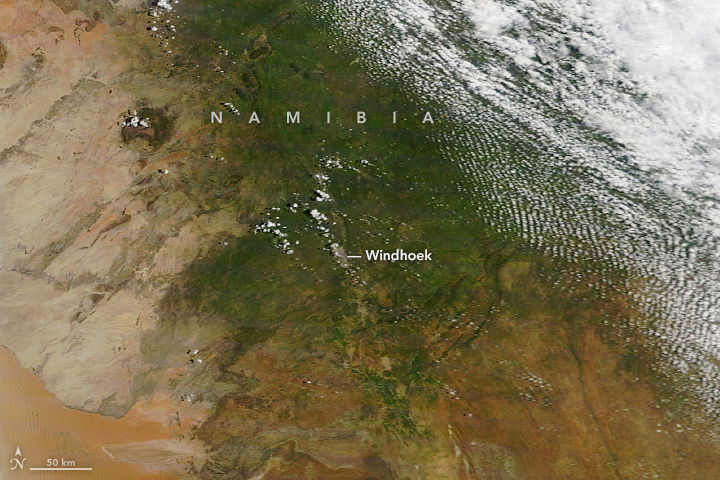 With approximately 300 days of sunshine annually, and persistent, dry onshore winds provoked by the Benguela current, Namibia is quite dry for much of the year. The rainy season (November through April) is modest by most precipitation standards in the world. This year, it has brought an abundance.

January 2021 saw rainfall totals double to triple the norm in the northeastern, central, and southern parts of Namibia. According to a weather monitor in Windhoek, 228 millimeters (9 inches) of rain fell in January; the long-term average is 85 millimeters (3 inches). The period of relatively abundant rains followed a December that brought about 25 percent more rain than normal. The wet season rainfall totals are the highest since 2010 and 2011. (This map shows precipitation anomalies as recorded by NOAA's Climate Prediction Center.)

The natural-color images above show the landscape greening due to the rain. They were acquired in February 2021 and January 2020 by the Moderate Resolution Imaging Spectroradiometer (MODIS) on NASA’s Terra satellite. The map below, also derived from Terra data, shows changes in the “greenness” of the landscape in February 2021 compared to the 20-year average for the month (Read more about the Normalized Difference Vegetation Index.) 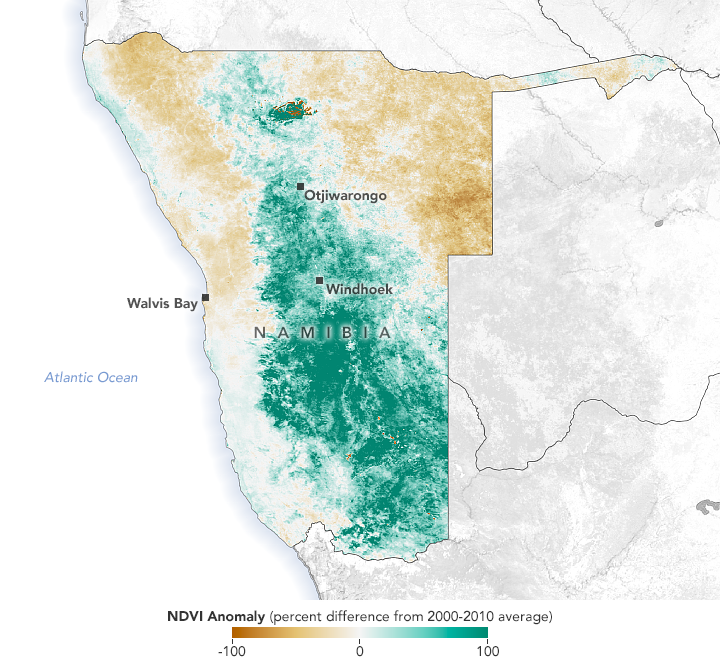 The strong rainfall has been a boon to farmers in the region, as nearly half of Namibia’s people depend on subsistence farming. The extra rain has filled many reservoirs behind the country’s dams. At the same time, the typically dry region has sporadic storm-drain systems, and some roads are poorly equipped to handle heavy rain. Flash floods and overflowing ephemeral rivers posed problems for much of January.

“It has been a good year for sure, even across into Botswana and South Africa,” wrote Frank Eckardt, a researcher at the University of Cape Town. “We had similar good rains in 2000 and 2011. There is a peridocity to it, which is essential for replenishing surface and groundwater storage. It will also provide much grazing for lifestock and, later, biomass for burning. By April the rains will be gone.” He noted, however, that the region has been getting drier over the long term.

The landscape has been transformed by the wettest rainy season since 2011.