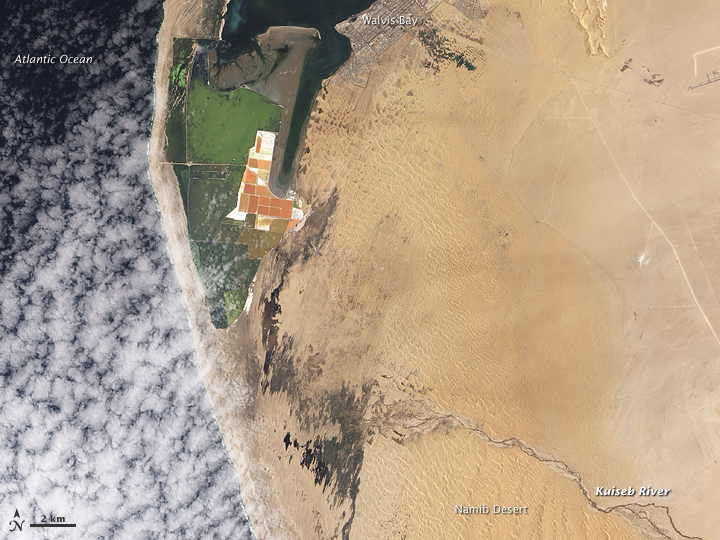 The Namib Desert stretches along the west coast of Africa, from the Kunene (or Cunene) River in the north to the Orange River in the south. About midway between, a third river, the Kuiseb, stretches toward the Atlantic Ocean. Yet the Kuiseb is impermanent, and years have passed without this river actually reaching the ocean. In 2011, sufficient rainfall propelled the Kuiseb toward the Atlantic Coast for the first time in decades.

The Advanced Land Imager (ALI) on NASA’s Earth Observing-1 (EO-1) satellite captured this natural-color image on February 27, 2011. Around Walvis Bay, where the Kuiseb has traditionally drained into the sea, salt works appear as rectangular shapes of orange and brown. Nearby shallow water appears green. South of the salt works, nature takes over. Irregularly shaped dark patches indicate standing water on the desert surface where water has apparently pooled at the end of the Kuiseb River. In the east, the river’s braided channels resemble dark, tangled threads.

The Kuiseb marks a major landscape change in the desert. Bare rocks prevail north of the river, while marching sand dunes predominate to the south. But the ephemeral water body makes only an imperfect boundary.

This image shows numerous sand dunes that have migrated past the Kuiseb and now border on Walvis Bay. By washing out accumulated sand, flash floods on the river generally prevent dunes from migrating past it—when flash floods occur. The cold Benguela Current flowing along the Atlantic Coast prevents much precipitation from moving inland, leaving the Namib Desert parched. Persistently dry conditions allow dunes to continue northward when there is no flowing water in their way.

Human activity also has affected the river’s path. A flood in 1963 caused major damage to Walvis Bay, and the subsequent construction of an embankment has blocked the Kuiseb River channel and caused the river to lose direction. Later floods pushed the river into an area of impermanent wetlands, but conditions were too dry to enable the Kuiseb to reach all the way to the Atlantic Ocean until 2011. The pool of water nearest the coast snakes northward to the bay, almost touching the salt works.

Water—or the lack of it—shapes not just landscapes but also human lives. The United Nations reports that in urban areas of Sub-Saharan Africa, up to 50 percent of the population lacks access to adequate water supplies, and 60 percent lacks adequate water sanitation. UN Water established 2005–2015 as the "Water for Life Decade," and established March 22 as its annual World Water Day.