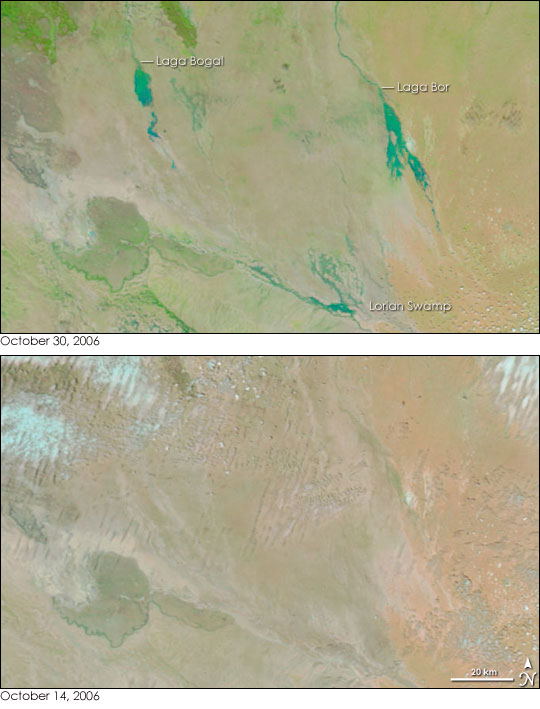 Kenya gets most of its rainfall in two doses: a long rainy season that runs from March or April through July or August, and a short rainy season that starts in September or October and usually tapers off in December. As if trying to make up for lack of rain during the 2005 short rainy season,which failed entirely, the rainy season that started in October 2006 proved to be unusually heavy. Some locations in Kenya received as much as 200 millimeters more rain than average in October. The heavy rain fell on drought-baked ground, triggering extensive flooding in northern Kenya. The East Africa Standard, a Nairobi newspaper, reported on October 28 that 10 people had died in the flooding and more than 75,000 were made homeless.

The Moderate Resolution Imaging Spectroradiometer (MODIS) on NASA’s Aqua satellite captured the top image of flooding in northern Kenya on October 30, 2006. Aquamarine, sediment-laden flood water runs through the Laga Bogal and Laga Bor river channels and spreads across the surrounding landscape in places. The Lorian Swamp, in the lower-right corner of the image, appeared dry on October 14, when the lower image was captured. By October 30, water flowed through the swamp. The rain has also spurred plant growth. The arid landscape assumed a green tint in the two weeks that passed between October 14 and October 30. In these false-color images, made with both infrared and visible light, vegetation is bright green, bare or sparsely vegetated ground is tan-pink, and clouds are pale blue and white. In this type of image, water is typically black or dark blue, but sediment has given the water a blue-green color in the top image.

Eastern Africa regularly goes through cycles of drought and floods, possibly driven by El Niño. El Niño is a cyclical warming of ocean waters in the central and eastern Pacific that can alter weather patterns around the world. In general, El Niño causes drought in some regions like Indonesia, Australia, and the Philippines, while bringing excess rain to others, including East Africa and the southwestern United States. In September 2006, NASA’s JASON satellite recorded a mild El Niño in the tropical Pacific Ocean. At the same time, drought was settling in over Australia and heavy rain pounded East Africa.