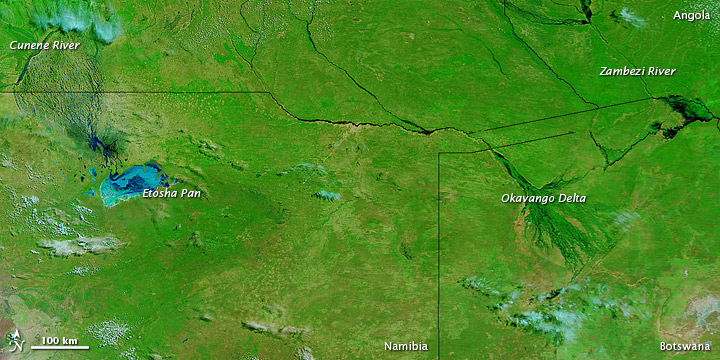 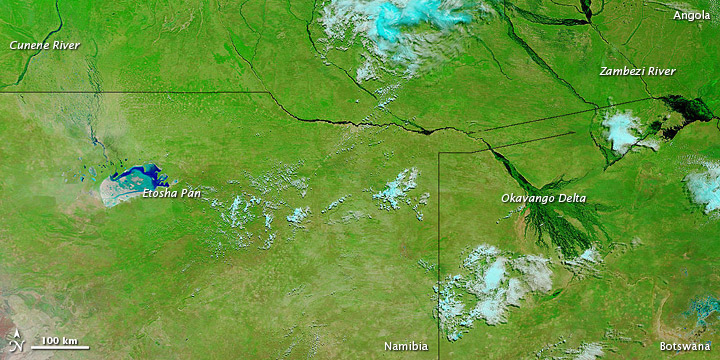 In Angola and Namibia, the rainy season typically lasts from November to March, and may extend into April. The 2010–2011 rainy season, however, was unusually severe. On April 4, 2011, the United Nations Office for the Coordination of Humanitarian Affairs (OCHA) reported that floods affected provinces across northern Namibia. Although the extent of the damage remained unclear, at least 20,000 people had been affected, and unconfirmed figures suggested that more than 37,600 people could be displaced. Another flood wave expected to arrive from Angola held the potential to worsen the situation, OCHA said.

The Moderate Resolution Imaging Spectroradiometer (MODIS) on NASA’s Terra satellite captured these images on April 12, 2011 (top), and April 22, 2010 (bottom). Both images use a combination of infrared and visible light to increase the contrast between water and land. Water varies in color from electric blue to navy. Vegetation is green. Bare ground is earth-toned. Clouds appear pale blue-green, and often cast shadows onto the land surface below.

One difference between the two images is the more robust vegetation apparent throughout the region in 2011. Although green predominates in both images, the greenery is more intense in 2011.

The unusually severe flooding in 2011 is more prominent in the west, where impermanent rivers extend from the Cunene (or Kunene) River to Etosha Pan. In the newer image, the saltpan holds much more water than it did a year before.

In the east, flooding actually appears less severe in 2011 than in 2010, especially along the easternmost tip of Namibia. The relatively dark hues of Botswana’s Okavango Delta in 2010 suggest water levels higher than those of 2011. The delta’s less conspicuous appearance in 2011, however, could result partly from greener surroundings.