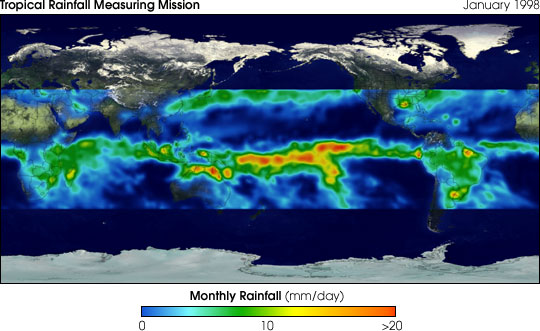 Ever wonder about the rain? Beyond the practicality of needing an umbrella, climate researchers have wondered about the science of rainfall for a long time. But it's only in the past few years that they've begun to roll back some of its secrets. One of their tools for doing so is a powerful satellite called the Tropical Rainfall Measuring Mission, or TRMM. Now, after three years of continual operation, project scientists have released dramatic new maps of rainfall patterns gathered across a wide band of the Earth. And with measurements from one of the satellite’s advanced sensors, meteorologists are now able to calibrate ground-based rain monitoring systems with greater precision than ever before.

A complete accounting of the world’s total rainfall has long been a major goal of climate researchers. Rain acts as the atmosphere’s fundamental engine for heat exchange; every time a raindrop falls, the atmosphere gets churned up and latent heat flows back into the total climate system. Considering that rainfall is the primary driving force of heat in the atmosphere, and that two thirds of all rain falls in the tropics, these measurements are significant for our understanding of overall climate.

The above image shows a one month average of rainfall measurements taken by the TRMM’s unique precipitation radar during January of 1998. Areas of low rainfall are colored light blue, while regions with heavy rainfal are colored orange and red. TRMM began collecting data in December of 1997, and continues today.

To learn more about the TRMM mission or order TRMM data, see the TRMM Home Page.