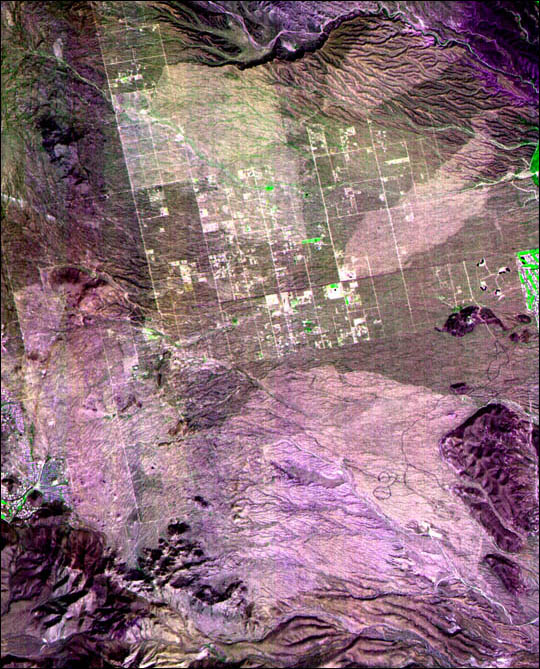 The summer of 2000 was the worst fire season in the past 50 years for the western United States. The large Los Alamos, New Mexico, fire and numerous smaller fires in the drought-stricken southwest attested to hazards of desert brush fires. These burned regions can later contribute to flash flooding and soil erosion over the next several monsoon seasons. It's important to better understand these dangers in light of the rapid increase in urbanization and population in cities throughout this region and in similar regions around the world.

Each of these scars were formed by human or naturally caused brush fires over the past 25 years, with the most recent and largest being the "Rio Fire" in 1995. That fire burned more than 58 square kilometers and threatened homes in several new housing developments. Currently, this region of the Phoenix valley is undergoing some of the most rapid urban development in the country, and hence is a prime pilot site for this study.

The image is a false-color composite of ASTER bands 2, 3, 1 in red, green, blue, respectively. This color representation highlights the presence of the fire scars, showing the low values of active vegetation (green) and an overall higher brightness (albedo) than the non-burned areas. The diffuse purple color indicates high reflectance values in the ASTER visible bands 1 and 2 and low in the near infrared (band 3). This spectral response is common for visually bright desert soils with little vegetative cover.

The ASTER science team has a dedicated urban monitoring program in place that assures data will be captured twice yearly over 100 large cities. There is an emphasis on those urban areas currently experiencing the fastest growth rates and environmental hazards. The effort will focus on cities in semi-arid environments. The primary goal of this effort is to ensure these data are acquired, processed and made available to scientists and local officials working in these cities.

Michael Ramsey of the University of Pittsburgh will be discussing this project on Dec. 19 at the American Geophysical Union meeting in San Francisco. His talk, "Mitigating Future Fire and Flood Hazards in Arid Urban Regions: Initial Analysis of Brush Fire Scars with the New ASTER Instrument," is part of the special session on hydrological applications of data from Terra.