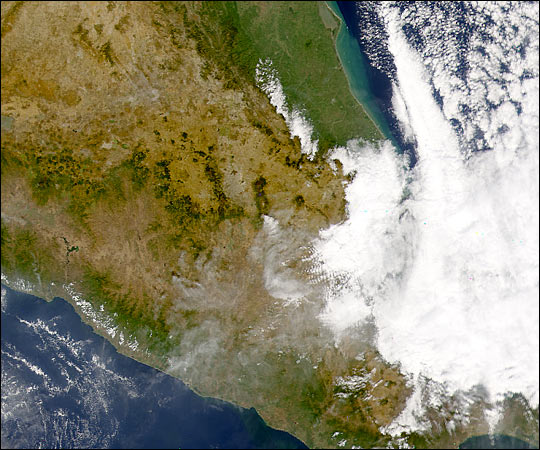 The Popocatepetl Volcano, almost 30 miles south of Mexico City, erupted yesterday (December 18, 2000) in what authorities are calling its most spectacular eruption since 800 A.D. This morning, Popocatepetl (pronounced poh-poh-kah-TEH-peh-til) continued spewing red-hot rocks as well as a column of smoke and ash about 2.5 miles high into the atmosphere.

This true-color image of the volcano was acquired today by the Sea-viewing Wide Field-of-view Sensor (SeaWiFS) flying aboard the OrbView-2 satellite. In this image, Popocatepetl’s plume (greyish pixels) can be seen blowing southward, away from Mexico City. There is a large cloud bank (bright white pixels) just to the east of the volcanic plume.

Although Popocatepetl has been active since 1994—when it awoke from a 70-year slumber—this most recent eruption is most concerning to the greater Mexico City region’s 20 million residents. The volcano demonstrated what it can do in 800 A.D. when it belched forth enough lava to fill many of the valleys in the surrounding region.

Earlier, scientists warned the citizens of Mexico that there is a dome of lava at the base of the volcano that is causing pressure to build inside. They are concerned that, if it continues to build unabated, this pressure could cause even larger eruptions in the future.