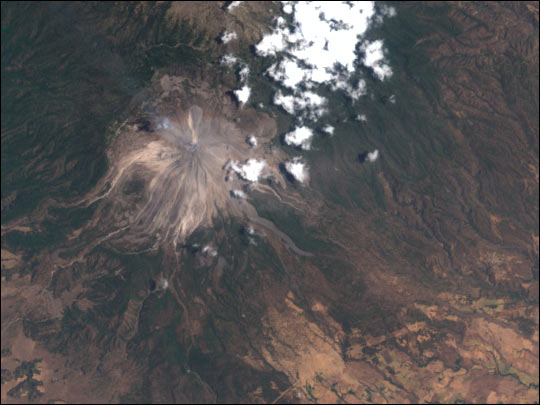 Located roughly 300 miles (485 km) west of Mexico City, Colima Volcano began spewing red-hot rocks down its slopes on February 5, 2002. The volcano had been issuing smoke, ash, and vapor for days prior to the eruption. This true-color image of the ?Volcano of Fire? was acquired on May 13, 1999, by the Enhanced Thematic Mapper Plus, flying aboard Landsat 7.

Authorities evacuated the residents of Yerbabuena, a small town located within 25 miles from the volcano. According to volcanologists, there is a huge dome of lava inside the Colima Volcano’s crater that could either collapse or explode, either way sending rivers of molten rock pouring out into the surrounding countryside. Colima volcano is considered to be the most active and, potentially, the most destructive of all nine volcanoes located in central Mexico.

Image by Robert Simmon, based on data provided by the Landsat 7 Science Team