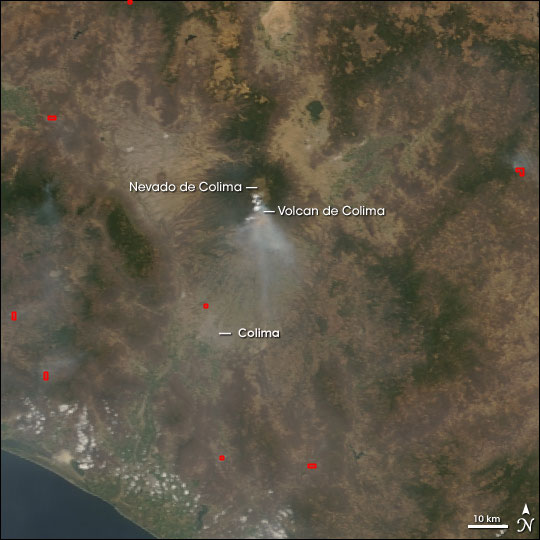 A light plume of ash and haze hangs over the peak of the Colima Volcano in this Moderate Resolution Imaging Spectroradiometer (MODIS) image, acquired by the Terra satellite on June 7, 2005. Since May 24, six large eruptions have exploded from the volcano, dusting the surrounding country with ash. Two large eruptions on June 5 and June 6 prompted authorities to evacuate the communities closest to the volcano. Colima, part of a larger volcano complex that includes its quieter northern neighbor, Nevado de Colima, is one of Mexico’s most active and potentially deadly volcanoes. It sits on the west coast of Mexico, approximately 690 kilometers (430 miles) west of Mexico City. The regional capital, Colima, forms a cement-colored blob less than 50 kilometers (30 miles) southwest of the volcano. The city is slightly obscured by haze in this image.

Some of the haze seen here is coming from fires, which have been marked in red. Located in a largely agricultural region, the fires were probably intentionally set to clear land. None are close enough to the volcano to have been caused by falling ash or rock.