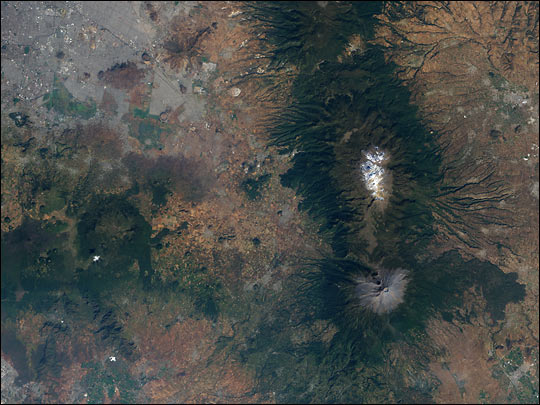 Located about 40 miles (65 km) southeast of Mexico City, Popocatepetl roared back to life on December 18, 2000, spewing red hot rocks, ash, and smoke high into the air over the Valley of Mexico. Concerned that there may be even more massive eruptions to follow, or perhaps mudslides from the summit's melting snow and ice, Mexican authorities asked nearby residents to evacuate the region.

The last major eruption of Popocatepetl (pronounced poh-poh-kah-TEH-peh-til) occurred in 800 A.D., in which vast amounts of lava and ash from the volcano completely filled many of the surrounding valleys. Since then, there have been at least five moderate eruptions, two of which occurred in the 1900s. Toward the end of 2000, scientists warned there were signs of activity within the volcano as pressure within a dome of lava at its base continued to build, which eventually led to the moderate eruption on December 18.

This true-color image of Popocatepetl was acquired on January 4, 1999, by the Enhanced Thematic Mapper Plus (ETM+) aboard NASA's Landsat 7 satellite. Even from this two-dimensional perspective, you get a sense of the volcano's impressive slopes as it towers some 17,930 feet (5,465 meters) above the surrounding landscape. Snow and ice encircle the summit (whitish pixels), at the top of which the volcano's crater can be seen clearly.

Surveying the larger surrounding region, there is ample evidence of human agriculture to feed the more than 20 million people who live in the greater Mexico City region (to the north).