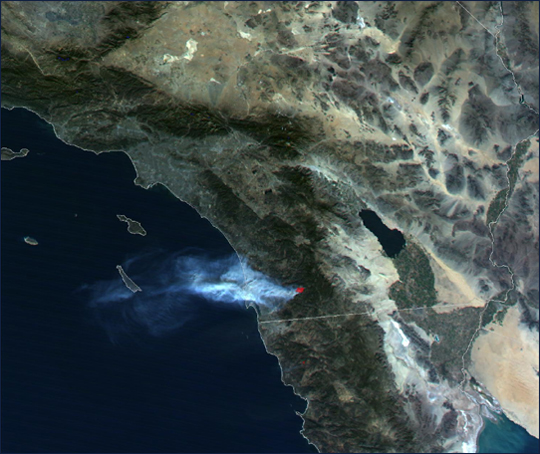 More than 2,000 firefighters continue to battle the "Viejas Wildfire" which has consumed more than 11,000 acres in the dry, mountainous region just east of San Diego, California. Authorities there believe the blaze may have been started on Wednesday, January 3, by a cigarette thrown from a car on Interstate 8. Shifty winds with gusts of up to 65 miles per hour helped fan and quickly spread the flames.

Late Wednesday, eyewitnesses reported seeing thick smoke and dime-sized bits of ash blowing toward downtown San Diego, prompting health officials there to warn residents with respiratory conditions to take necessary precautions. Parts of other communities, such as Alpine, have been evacuated to avoid the rapidly spreading flames. Firefighters estimate that the Viejas Fire, named after a nearby Native American reservation, will be contained by late Saturday, January 6.

This image of the wildfire was acquired on January 4, 2001, by the Moderate-resolution Imaging Spectroradiometer (MODIS), flying aboard NASA's Terra spacecraft. The scene shows the wildfire and smoke plume from the Alpine region, east of San Diego. This false-color image was generated using a combination of MODIS' thermal infrared data, at 1-kilometer resolution, along with two of the sensor's 500-meter resolution visible channels.

These data were acquired via direct broadcast by the SeaSpace TeraScan SX-EOS receiving station at SeaSpace Corporation in Poway, California. The image was processed, Earth-located and enhanced using TeraScan software.

Nearly two thousand residents of communities in the San Bernardino Mountains had to evacuate their homes over the weekend of September 15, 2007, when a fast-spreading wildfire raced through the San Bernardino National Forest. According to the USDA Forest Service’s Incident Information Website, the Butler 2 Fire was an estimated 15,433 acres and 12 percent contained on September 17. 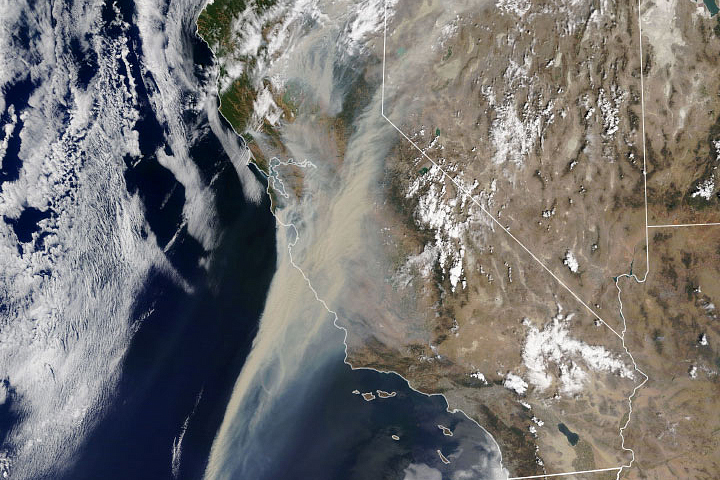