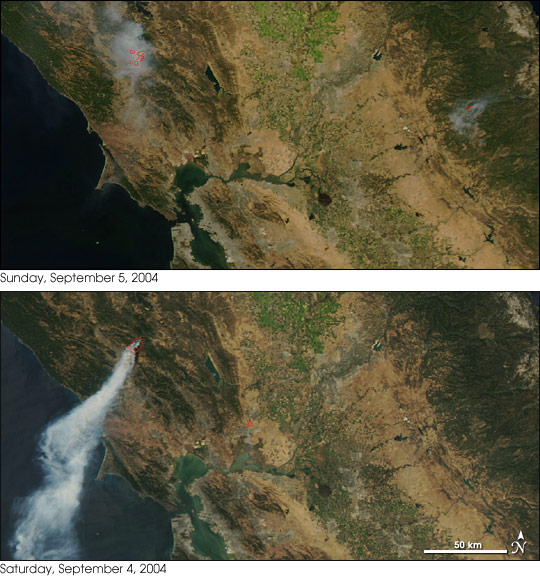 A fast-moving wildfire sprang up in northern California’s Sonoma wine country on Friday, September 3, and rapidly grew to several thousand acres, threatening homes and vineyards. This image of the Geysers Fire, named for the nearby geothermal power plant, shows the blaze on September 4 and 5, 2004. On September 4, the fire was belching out a thick plume of smoke that blew southward over the Pacific Ocean. The next day the smoke was more diffuse, and it lingered over the rugged terrain, where, according to news reports, fine ash drifted down like snow.

As of Monday, September 6, the National Interagency Fire Center estimated the fire was affecting 10,100 acres and firefighters had the blaze about 15 percent contained. Although the winds that drove the fire explosively over the weekend have since died back, the weather will be doing little more to cooperate with firefighters’ efforts in the first of the week, with high temperatures and continued dry conditions predicted. At the bottom of these images is San Francisco Bay.

These images were captured by the Moderate Resolution Imaging Spectroradiometer (MODIS) on NASA’s Aqua satellite.