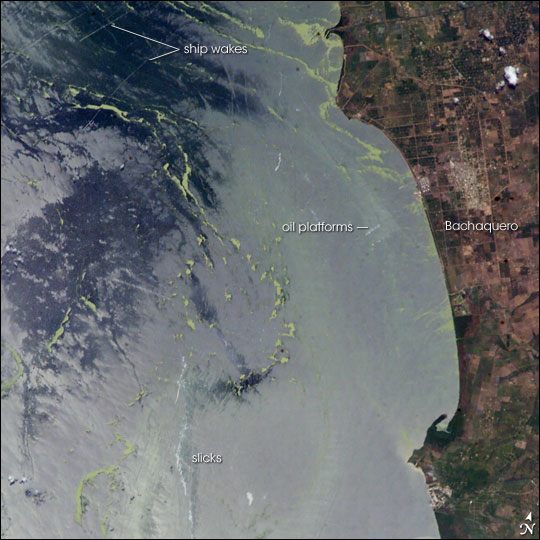 Venezuela’s Lake Maracaibo presents a complicated surface to interpret. The area is the largest oil producing region in the western hemisphere. Oil platforms and other infrastructure supporting the oil industry can be seen in the lake and along the coast. Oil slicks (very bright streaks) are common. Heavy ship traffic produces linear ship wakes. The vivid green streaks and swirls are patches of duck weed growth that has thrived on the lake during the summer of 2004. The duck weed problem was so extensive that the Venezuelan government launched a massive campaign to remove it.

This image was taken by astronauts aboard the International Space Station on August 23, 2004. Sunglint—sun light reflecting off the relatively smooth water surface—produces patterns that highlights water surface features and movements. Sunglint reflects brightly off oil slicks, ship wakes and water roughened variably by wind in this image. Rough surfaces like floating vegetation (duck weed) stand out against the smooth water.

An earlier view of the duckweed swirls in Lake Maracaibo was taken by the Moderate Resolution Imaging Spectroradiometer (MODIS).

Astronaut photograph ISS009-E-19682 was acquired August 23, 2004, with a Kodak K760C digital camera with an 180-mm lens, and is provided by the Earth Observations Laboratory, Johnson Space Center. The International Space Station Program supports the laboratory to help astronauts take pictures of Earth that will be of the greatest value to scientists and the public, and to make those images freely available on the Internet. Additional images taken by astronauts and cosmonauts can be viewed at the NASA/JSC Gateway to Astronaut Photography of Earth.