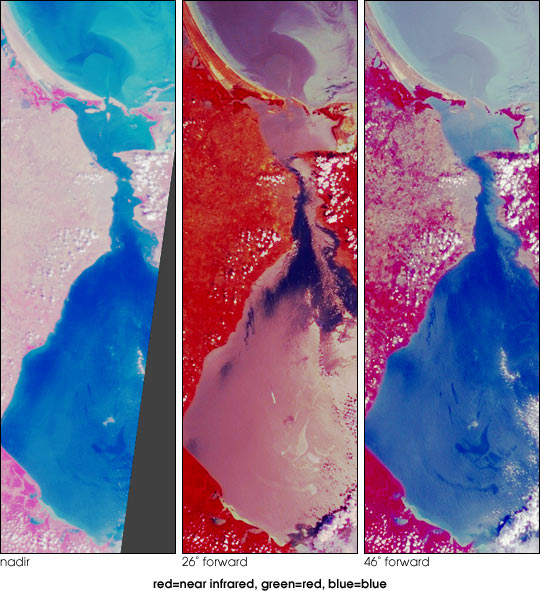 Several oil slicks occurred on Lake Maracaibo in northwestern Venezuela between December 2002 and January 2003, and were observed by various satellite instruments. These images from the Multi-angle Imaging SpectroRadiometer (MISR) provide new information relating to one such event near the center of Lake Maracaibo on December 26, 2002.

In unpolluted areas, the water surface is “ruffled” by wind and the resulting wave facets divert reflected rays into many directions. An oil film dampens the presence of small wind-driven “capillary” waves, resulting a smoother, more mirror-like surface. Also, oil is more strongly absorbing than the surrounding water. Therefore, at most viewing angles, a surface slick will appear darker than the surrounding unpolluted areas, whereas near the specular angle (the angle at which a perfect mirror reflects light) it will appear brighter. Simultaneous observation at multiple view angles therefore enhances the reliability of oil-slick detection using optical imaging.

An example of how the optical contrast of an oil film on a water surface changes as a function of viewing angle is illustrated by these false-color MISR images, comprised of near-infrared, red and blue spectral data at three different angles, using the vertical-viewing camera (left), the 26ø-forward-viewing camera (center) and the 46ø-forward-viewing camera (right). A swirly area in the middle of the lake appears darker than the surrounding waters at both the nadir and 46° views, but brighter than the surrounding waters at the 26° view. Of the three images, only the 26° camera observes close to specular reflection angle.

The Multi-angle Imaging SpectroRadiometer observes the daylit Earth continuously from pole to pole, and every 9 days views the entire globe between 82 degrees north and 82 degrees south latitude. The MISR Browse Image Viewer provides access to low-resolution true-color versions of these images. These data products were generated from a portion of the imagery acquired during Terra orbit 16081. The panels cover an area of 72 kilometers x 225 kilometers.