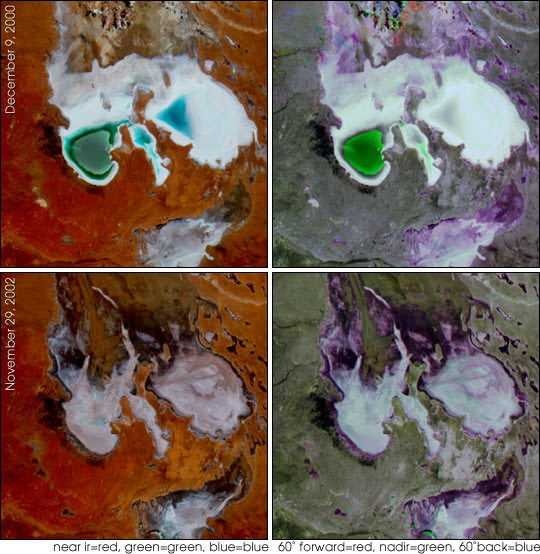 Lake Eyre is a large salt lake situated between two deserts in one of Australia’s driest regions. However, this low-lying lake attracts run-off from one of the largest inland drainage systems in the world. The drainage basin is very responsive to rainfall variations, and changes dramaticallywith Australia’s inter-annual weather fluctuations. When Lake Eyre fills, as it did in 1989, it is temporarily Australia’s largest lake, and becomes dense with birds, frogs and colorful plant life. The Lake responds to extended dry periods (often associated with El Niño events) by drying completely.

These four images from the Multi-angle Imaging SpectroRadiometer contrast the lake area at the start of the austral summers of 2000 and 2002. The top two panels portray the region as it appeared on December 9, 2000. Heavy rains in the first part of 2000 caused both the north and south sections of the lake to fill partially and the northern part of the lake still contained significant standing water by the time these data were acquired. The bottom panels were captured on November 29, 2002. Rainfall during 2002 was significantly below average ( http://www.bom.gov.au/ ), although showers occurring in the week before the image was acquired helped alleviate this condition slightly.

The left-hand panels portray the area as it appeared to MISR’s vertical-viewing (nadir) camera, and are false-color views comprised of data from the near-infrared, green and blue channels. Here, wet and/or moist surfaces appear blue-green, since water selectively absorbs longer wavelengths such as near-infrared. The right-hand panels are multi-angle composites created with red band data from MISR’s 60-degree forward, nadir and 60-degree backward-viewing cameras, displayed as red, green and blue, respectively. In these multi-angle composites, color variations serve as a proxy for changes in angular reflectance, and indicate textural properties of the surface related to roughness and/or moisture content. Data from the two dates were processed identically to preserve relative variations in brightness between them. Wet surfaces or areas with standing water appear green due to the effect of sunglint at the nadir camera view angle. Dry, salt encrusted parts of the lake appear bright white or gray. Purple areas have enhanced forward scattering, possibly as a result of surface moistness. Some variations exhibited by the multi-angle composites are not discernible in the nadir multi-spectral images and vice versa, suggesting that the combination of angular and spectral information is a more powerful diagnostic of surface conditions than either technique by itself.

The Multi-angle Imaging SpectroRadiometer observes the daylit Earth continuously and every 9 days views the entire globe between 82 degrees north and 82 degrees south latitude. The MISR Browse Image Viewer provides access to low-resolution true-color versions of these images. These data products were generated from a portion of the imagery acquired during Terra orbits 5194 and 15679. The panels cover an area of 146 kilometers x 122 kilometers, and utilize data from blocks 113 to 114 within World Reference System-2 path 100.

Sitting near Australia’s rugged southern coast, the South Australian town of Mount Gambier is built on the side of an extinct volcano. The caldera of the volcano has filled with rainwater, forming a very deep lake that provides the town with water. The large caldera lake is called Blue Lake due to a rather peculiar characteristic: the water turns a brilliant cobalt blue during the summer and early fall.