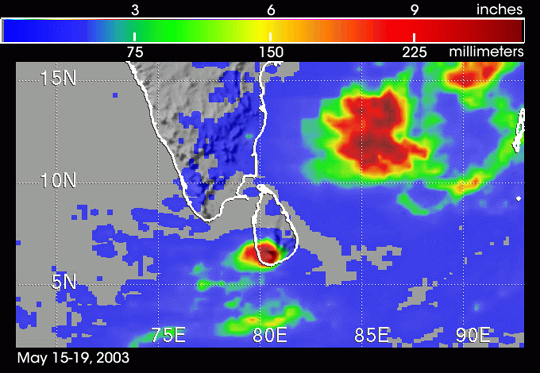 During the past few days (May 15-19, 2003) Tropical Cyclone 01B developed in the Indian Ocean and achieved hurricane status. The storm produced heavy rainfall in Sri Lanka, leading to flash flooding and a large loss of life there. The total rain accumulation, exceeding nine inches, is shown in the false-color image above. The rain accumulation map was produced using the TRMM-based, near-real-time Multi-satellite Precipitation Analysis at NASA’s Goddard Space Flight Center.

In this image, note the huge rainfall footprint produced by Tropical Cyclone 01B as it intensified over the Bay of Bengal. (Here is another, true-color image of the cyclone as it approached the coast of Myanmar in southeast Asia on May 19, 2003.) At first, it would appear that the isolated rainfall pocket located over Sri Lanka bears little relation to the burgeoning tropical storm. However, there is evidence to suggest that the rainstorms that deluged Sri Lanka were associated with an outer “feeder band” of moisture entering the tropical cyclone from the southwest.

On May 19, 2003, the MODIS instrument onboard the NASA's Aqua satellite captured this bird's-eye view of Tropical Cyclone 01B as it was making landfall near Ramree Island on the western coast of Myanmar.