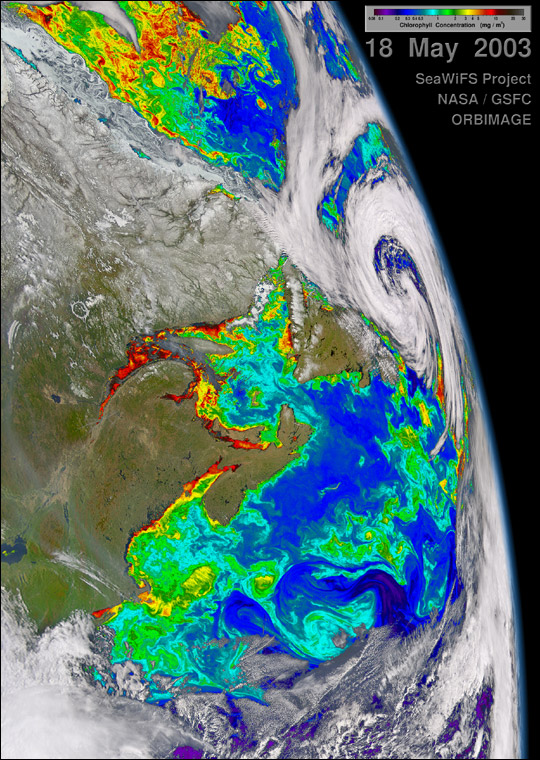 This Sea-viewing Wide Field-of-view Sensor (SeaWiFS) image is a quasi-true-color depiction of land and clouds over northeastern Canada on May 18, 2003. The ocean has been color-coded to represent areas of high and low chlorophyll concentrations wherever the sensor had a clear view of the sea surface. Red areas represent the highest values, ranging from 5 to 10 milligrams of chlorophyll per cubic meter of sea water; green areas show intermediate values, somewhere around 2 milligrams per cubic meter; and blues and purples show the very lowest values, respectively (below 0.4 mg per cubic meter).

Note that snow and ice still cover Labrador. Directly off the Labrador coast, eddies in the ocean draw sea ice (or perhaps low-level fog) into tight patterns that reflect the water motions. Farther offshore, the pattern continues to be visible in the computed chlorophyll field. South of these oceanic eddies spins a larger atmospheric eddy with the characteristic counterclockwise spiral of a Northern Hemisphere low-pressure system. Still farther south, an eddy-filled band of ocean with elevated chlorophyll concentration stretches out to the east of Cape Cod and Georges Bank, just to the north of the cloud-covered, meandering, low-chlorophyll Gulf Stream.

Chlorophyll is the primary pigment found in microscopic marine plants. Known as phytoplankton, these tiny plants help form the foundation of the marine food chain. By precisely measuring ocean color, scientists can accurately estimate how chlorophyll is concentrated in the ocean’s near-surface waters, which directly correlates with abundance of phytoplankton.