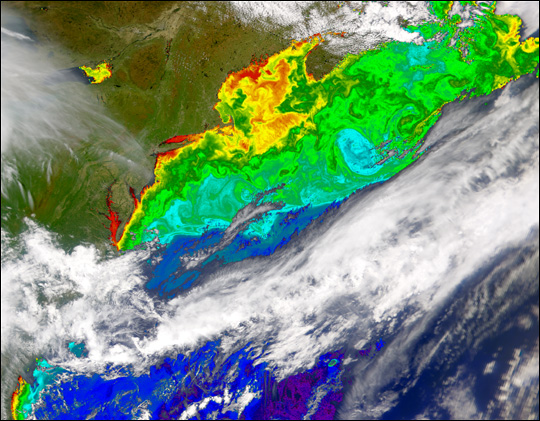 On May 11, 2002, clear skies revealed the highly productive waters in the North Atlantic Ocean off eastern North America. This image was produced using data acquired by the Sea-viewing Wide Field-of-view Sensor (SeaWiFS), flying aboard the OrbView-2 satellite. It is a pseudo-color representation of chlorophyll concentrations at the sea’s surface, overlaid on the quasi-true-color image. Note that the chlorophyll data overlay brings out much more of the complexity of the current patterns in this part of the Atlantic Ocean.

In this view the waters over Georges Bank and in the Gulf of Maine exhibit the high chlorophyll concentrations that mark thriving phytoplankton populations which are the base of the food web for most of the rest of those ecosystems. To the south, chlorophyll concentrations decrease rapidly across the northern boundary of the meandering Gulf Stream. To the east of Georges Bank one of the meandering currents has pinched off into a large warm core ring.

Spring Bloom in the North Atlantic