Spring Bloom in the North Atlantic 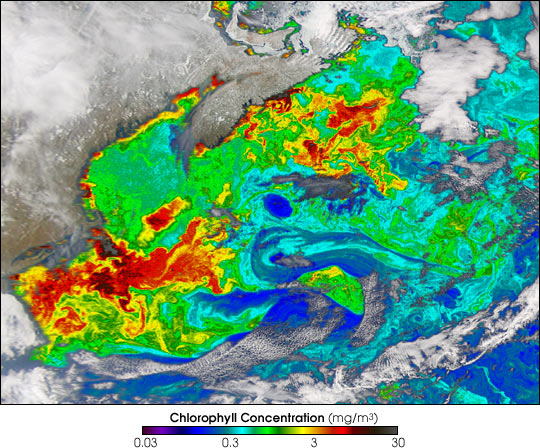 People living at higher latitudes in the Northern Hemisphere are accustomed to seeing plants beginning to bloom at this time of year. But did you know that a spring bloom in the North Atlantic Ocean is also a yearly occurrence? Indeed, even as snow still covers much of the ground in northeastern Canada, plant life in the North Atlantic is already in full bloom.

In the winter, as many storms blow through the North Atlantic region, strong winds churn the ocean, stirring up nutrients from the bottom and drawing them up near the surface. But since the days are shorter in winter, there is less sunlight for photosynthesis, and so there is less biological activity in the ocean. As winter transitions into spring and the days grow longer, the water receives more sunlight and the surface layers of the Atlantic begin to warm. The waters become stratified — there is less mixing between the much colder, deeper waters and the warm near-surface waters. Thus, the surface layer of the North Atlantic tends to have a relatively high nutrient loading at this time of year. So the phytoplankton tend to stay nearer the surface, where the water is warmer and nutrients are abundant. Plus, because the days are growing longer, there is more exposure to sunlight and more time for photosynthesis.

But as all good things eventually come to an end, the phytoplankton use up the nutrients in the surface water column as spring wears on, and the bloom gradually fades over time.