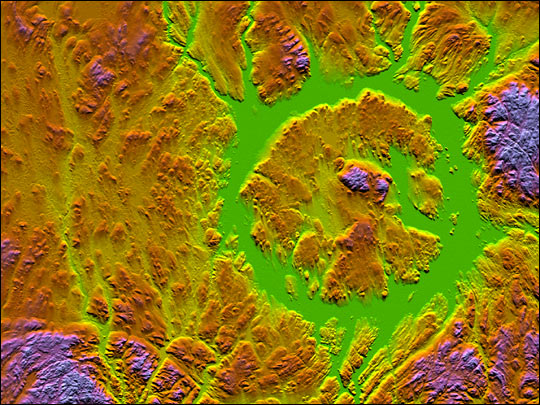 Manicouagan Crater is one of the world’s largest and oldest known impact craters and perhaps the one most readily apparent to astronauts in orbit. The age of the impact is estimated at 214 million years before present. Since then erosion has removed about one kilometer (0.6 miles) of rock from the region and has created a topographic pattern that follows the structural pattern of the crater. A ring depression (prominently seen as green) encloses a central peak. The ring depression now hosts the Manicouagan Reservoir and so appears as a distinct ring lake to astronauts and as a smooth and flat feature in this topographic visualization. A fine pattern of topographic striations trending south-southeast, most prominent within the crater itself, indicates the flow direction of glaciers that covered this area during the last ice age.

Three visualization methods were combined to produce this image: shading, color coding, and synthetic stereoscopy. The shade image was derived by computing topographic slope in the north-south direction. Northern slopes appear bright and southern slopes appear dark. Color coding is directly related to topographic height, with green at the lower elevations, rising through yellow, red, and magenta, to blue at the highest elevations. The stereoscopic effect was then created by generating two differing perspectives, one for each eye. The stereo image can be seen in 3-D by viewing the left image with the right eye and the right image with the left eye (cross-eyed viewing) or by downloading, printing, and splitting the image pair and viewing them with a stereoscope. When stereoscopically merged, the result is a vertically exaggerated view of Earth’s surface in its full three dimensions. Total topographic relief from the ring lake level to the central crater peak is about 600 meters (2000 feet).

The anaglyph is derived entirely from the SRTM elevation model. First a gray image was created that uses image brightness to represent a mix of topographic height (higher elevations are brighter) and topographic orientation (northern slopes are brighter). The stereoscopic effect was then created by generating two differing perspectives, one for each eye. When viewed through special glasses, the result is a vertically exaggerated view of the Earth’s surface in its full three dimensions. Anaglyph glasses cover the left eye with a red filter and cover the right eye with a blue filter.

Elevation data used in this image were acquired by the Shuttle Radar Topography Mission aboard the Space Shuttle Endeavour, launched on February 11, 2000. The mission used the same radar instrument that comprised the Spaceborne Imaging Radar-C/X-Band Synthetic Aperture Radar that flew twice on the Space Shuttle Endeavour in 1994. The Shuttle Radar Topography Mission was designed to collect three-dimensional measurements of the Earth’s surface. To collect the 3-D data, engineers added a 60-meter-long (200-foot) mast, installed additional C-band and X-band antennas, and improved tracking and navigation devices.