Windswept Shores of the Aral Sea 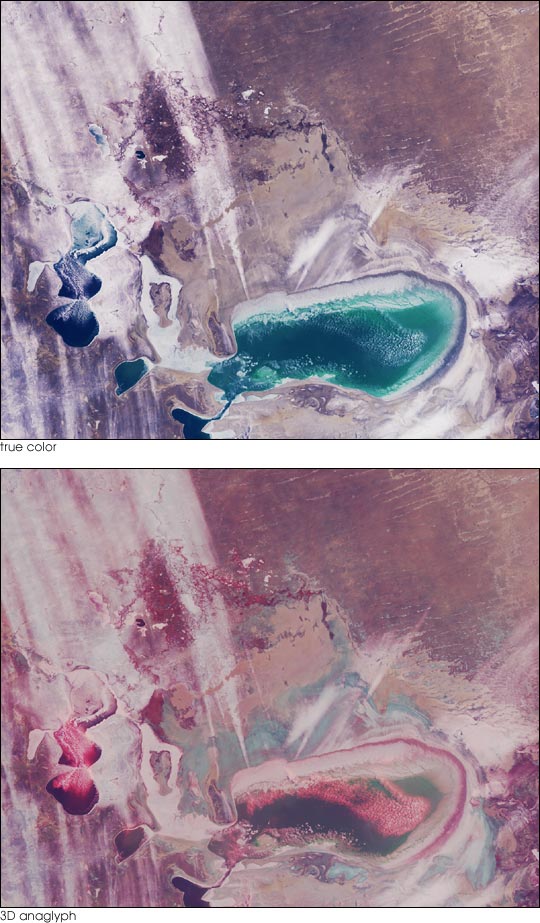 As recently as the 1960’s the Aral Sea of Kazakhstan and Uzbekistan was the fourth-largest inland sea in the world. Since then, its water volume has dropped by about 80% due to extensive irrigation systems developed during the Soviet era to produce cotton and other crops. What was once a single body of water has now separated into several smaller seas. Since the separation of the Little Aral from the Large Aral in 1987, the shores of what had once been an island in the middle of the Large Aral (Vozrozhdeniya Island) have expanded to form a land bridge that almost completely separates the eastern and western parts of the Large Aral. These views from the Multi-angle Imaging SpectroRadiometer (MISR) portray the Little Aral and the eastern Large Aral at the onset of winter, on December 3, 2002.

A natural-color view from MISR’s nadir camera is shown at top, while the bottom panel is a 3D stereo anaglyph in which red-band data from the 60-degree forward-viewing camera is combined with green and blue-band data from the nadir (vertical-viewing) camera. To facilitate stereo viewing, the images have been rotated so that north is toward the left and east is toward the top. Viewing the anaglyph in 3D requires the use of red-blue glasses, with the red filter placed over your left eye. Information on ordering glasses can be found at http://photojournal.jpl.nasa.gov/Help/VendorList.html#Glasses. The Little Aral Sea is located near the left-hand edge of these images, and the eastern portion of the Large Aral is below image center.

Of the two major rivers that once fed the Aral Sea, the freshwater contribution from the Amu Darya River is now negligible. The Syr Darya River now only feeds the Little Aral. Depletion of the Aral Sea has led to soil and water salination and agrochemical contamination. The retreating shoreline leaves the surface encrusted with salt and with agrochemicals brought in by the rivers. As the Sea’s moderating climatic influence has diminished, temperature variations in the region have altered, resulting in colder winters and hotter, drier summers. When strong westerly winds occur, large quantities of saline dust (and agrochemical toxins) can travel several hundred kilometers.

In these images, several groups of low cumulus clouds are clustered over open bodies of water and are identifiable in the stereo view by their height above the surface. A number of large white streaks extend eastward toward the Kyzylkum desert. Although their altitude cannot be ascertained from the nadir image, the stereo anaglyph shows that they are close to, or at, the surface. Several of these features originate from the eastern edge of the Large Aral, and may be associated with windblown snow and/or salt particles carried aloft.

The Multi-angle Imaging SpectroRadiometer observes the daylit Earth continuously and every 9 days views the entire globe between 82 degrees north and 82 degrees south latitude. The MISR Browse Image Viewer provides access to low-resolution true-color versions of these images. These data products were generated from a portion of the imagery acquired during Terra orbit 15741. The panels cover an area of about 370 kilometers x 300 kilometers.