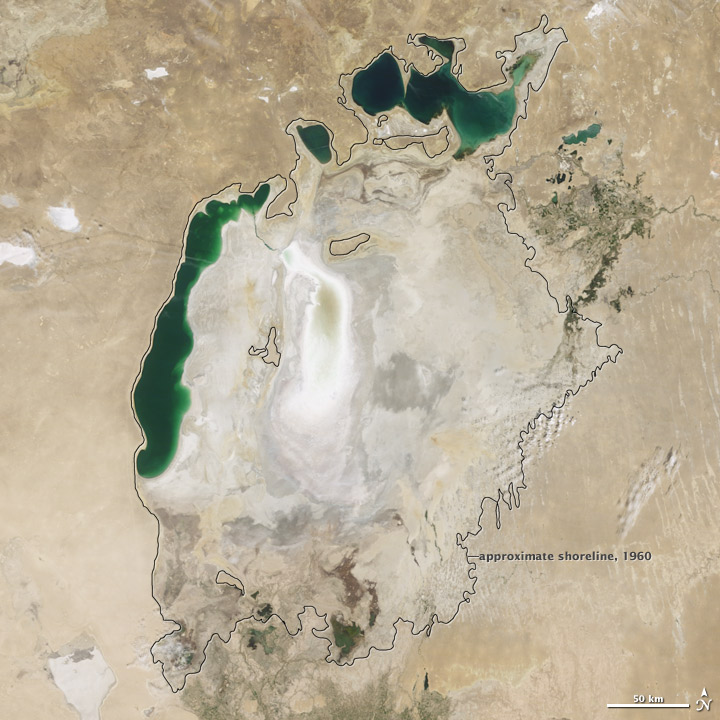 Throughout the first half of the twentieth century, the Aral Sea was the world’s fourth-largest lake. In the 1960s, the Soviet Union began a massive irrigation project in what are now Kazakhstan, Uzbekistan, and Turkmenistan, diverting water from the rivers that feed the Aral Sea to irrigate farmland. As its water levels dropped, the lake began splitting into smaller pieces: the Northern (Small) Aral Sea and the Southern (Large) Aral Sea. The Southern Aral Sea further split into eastern and western lobes. The Earth Observatory’s World of Change: Evaporation of the Aral Sea feature tracks this process over the past decade.

Much of what finally doomed the Southern Aral Sea was an attempt to save its neighbor to the north. In 2005, Kazakhstan built the Kok-Aral Dam between the lake’s northern and southern portions to preserve water levels in the north. The Northern Aral Sea actually exceeded expectations with the speed of its recovery, but the dam ended prospects for a recovery of the Southern Aral Sea, which some authorities already regarded as beyond help.